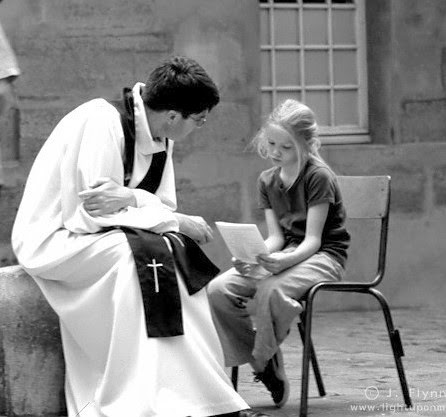 “A man’s highest moment is when he kneels in the dust,
& beats his breast, & tells all the sins of his life.”--Oscar Wilde.

Confession is good for the soul--
but              relative to what?                   We all harbor darkness within
the etherial epidermis of our essence,
and those ebony stripes, that weave abstract
patterns within our psyche, are unfortunately forever
in flux, mysterious shape-shifting multi-highways constantly
changing both direction & configuration as the sensory
storms of thunderous emotion roll over
the vast prairie of our personality.

Confession is often aligned with morality,
a Muse, an impetus for disclosure,
as an intense reflection of our
childhood lessons & experiences.                We are taught, or conditioned
to only verbalize those thoughts that
are socially acceptable, tinged with candor,
good manners & common sense.

Do we need to exercise the rites
of confession for ourselves
as we allow our selfishness,
arrogance, &
ignorance to cast us
in the role of asshole?       Probably not,
even though psychologists tell us
that self-delusion can be prevalent.

Confession is too often mixed up with
apology, regret, guilt, repression, or depression,
so just who does it serve?
Do you really think that God         in any of his guises         really cares about
the hidden festering feelings you may have
regarding homosexuality, other religions, other races, sports
teams, same-sex marriages, or political parties?

In addition          the specters of truth, dishonesty, scamming, exaggeration
abuse & ego all join the posse of participants
when the urge to purge, to confess rises up
like waves of nausea,
like bile or acid reflux,
as you prepare to spew your perceptions,
like projectile vomiting of sin & misdeeds
to someone,
to something,
to the clouds, the crows, or the wind.

We are painfully aware
that the police, or terrorists are quite capable
of beating confessions out of innocent people, yet we persist
in the fallacy that confession
can successfully masquerade as a solution.

It’s just more complicated than that,
like trying to reduce evolution to Darwinism,
or cosmic consciousness to Genesis.         Sure, confession can/should
be a tool in our survival kit, but
we should never let that tool be misunderstood or misused;
like using a claw hammer to brush your teeth,
or scratch at an insect bite with a hand saw;
for Confession flies in the same flock as Faith,
& it is just as hard to define
utilize, or completely understand.

Oh the belief in confession.. really interesting the belief that it would do anything better.. that a false confession is better than truth.. somehow so many important things in your righteous rant.. A confession is something that I wouldn't trust.

it is confession that makes sins of the things we do, just as doubt is an important part of faith. >KB

confession I do not think needs to be formalized as much as we need to let out the feelings and thoughts...and even the guilt we feel....who we confess to is dependent on the situation as well...I think it opens up to a very personal dialogue with others as well....

I'd rather confess with no limitations and be an asshole, than hold my tongue to be "nice"... nice is nothing; nice is average and forgettable. Damn me for my words but for sure you will remember them...

perhaps the confession helps us the most... to relieve some of the pain

You have made some good points, Glenn. Who, really, does confession serve? And, yes, we should never misuse it. And there are times that we should just consider keeping our mouths shut....and sparing others the self-serving details!

What a great look a confession. Certainly a tool, but it is quite often misused.

Beautifully written....and I love the way you have formatted it too. These two lines: 'like using a claw hammer to brush your teeth,
or scratch at an insect bite with a hand saw;' are such spectacular analogies....really drive your point home so perfectly. Appreciated the additional touch of having the poem read verbally as well.

I love your comparisons; confession can be exactly the wrong thing to do.

I like all the shades of confession, and you are right, we mix it up with apology, regret, guilt or depression. I think there are confessions that need to be said or shared with others, and other stuff that need to be kept to ourselves.

a lot to think about in this. I think that for confession to be real, it needs to be self-motivated, not forced or coerced...and it also needs to be accompanied by a genuine desire to change and become better.

oh...and for some reason my teeth hurt after reading this...I shall try not to brush my teeth with a claw hammer...

You are always and forever will be my favorite poet. I love your words and your brute honestly.

The likening to the many lane highway is so effective as is the rest...excellent work, Glenn!

Its just more complicated than that- so so true

I think that the light shone on hidden things enables healing Glenn.

Confession, repentance, God seem to be a good triumvirate.

I think confession is about internal forgiveness, but it is only successful if you are truly sorry and not just going through the motions to win a star in heaven.

This piece took confessions as a whole to a different level. Interesting to see how one can feel and expect from a confession!

So true.. my memories as a Catholic boy are more full of guilt from confession than absolution from sin.. and truly the guilt can be the sin.. more than the nature that is human... that no sensible GOD WILL create asSIn....as in human nature fully expressed or the peace of ZEN ALONE.. ALLONE.. JUST IS... JUST IS..

TRULY JUSTICE
AT THE END OF

Confession is too often mixed up with
apology, regret, guilt, repression, or depression,
so just who does it serve?

You raise some valid questions Glenn - few days back a statement came from a convicted rapist here and he showed no signs of remorse. Your piece made me think about him.

Oh, so much here Glen. So, who suffered more in The Scarlet Letter? (I hated that book!) Who does it serve to confess?

"Do you really think that God in any of his guises really cares about
the hidden festering feelings you may have
regarding homosexuality, other religions, other races, sports
teams, same-sex marriages, or political parties?"

A fine indictment of confession. I must admit (not confess) I didn't write a personal confession because I find too much in the receiver to be predatory. A vampirism of vulnerability where power is implied (especially if the receiver of the confession is an intercessor).