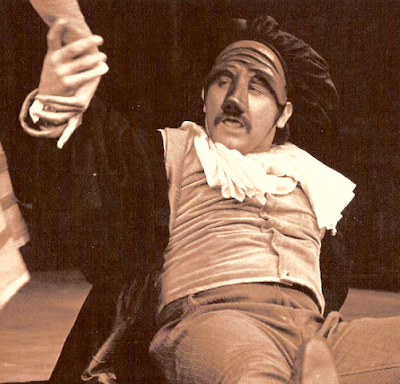 image of me in a Commedia play.

“Love art in yourself, & not yourself
in art.”--Konstantin Stanislavski.

1960--16 years old, sophomore in high school, got my driver’s
license, first car a 1952 Chev business coupe, got laid for the
first time, wanted to turn out for football, play at fullback, but
joined the Stage Crew instead, became a scene painter secondary
to my love of sketching/painting, created a painting of a Mississippi
riverboat on an 80’ X 30’ scrim.

1961--Junior year High school, while wrestling with a friend
back stage over a Yankee screwdriver, hit him in the mouth
& knocked out his front teeth, chained the disliked Shop teach-
er’s new Edsel to a phone pole, then felt guilty when it pulled
the bumper off.
1962--graduated from high school, saw Elvis while
attending the World’s Fair in Seattle where he was
making a movie, made the transition from stage hand
to actor, playing Sitting Bull in ANNIE GET YOUR GUN,
winning the Best Actor of the Year award.

1963--decided against college, went to work
in my father’s machine shop located next to
the Duwamish River, got fired because I refused
to pull out a dead wharf rat that had crawled into
a welder & got fried; can still smell it.

1964--got a scholarship & attended a community college, starring as
Benedict in MUCH ADO ABOUT NOTHING, began to get serious about
writing poetry, inspired by English professors.

1965--graduated from Highline College first in my class, having
dreams about achieving success as an actor & writer, transferred
to the U of W, English & Drama major.

1966--Viet Nam War was raging & I got drafted right out
of school, but got a 120 day delay for boot camp because
my mother was dying.

1967--got out of boot camp, designated the
Outstanding Recruit Squad Leader, six months
later reprimanded for my bad attitude; got fired as
Captain’s Driver at NAS Miramar.

1968--discharged from the service,
started back to college as Drama major,
had to help an old girlfriend, impregnated by
old friend while I was away, to find a midnight
abortionist, both illegal & traumatic.

1969--became a college Star in play after play,

1970--auditioned for the U of W’s fledgling BFA Professional Actor’s
Training Program, accepted & began three years of conservatory
training; hell, I was on my way--too bad it didn’t work out.

Posted over on dVerse Poets Pub MTB
Posted by Glenn Buttkus at 8:58 AM

A foray of the 60s - the period when I was still a kid. The traumatic abortion - shudder - lots of things happening during that era. I have to say it was not always better in the past (except that we were younger and more attractive) - did you write it all in 9 minutes? Hehe ;-)

Too bad the actor's training program didn't work out as you wanted ~ Wow, what a baptism of fire ~

Perfect senryu at the end - I just says everything. That time definitely was a baptism of fire for many of us. Great share. I'd like to have done something similar but to be honest, there was a decade I totally don't remember. The pic of you from times past was super.

Glenn I love what yu did with this free-verse. A, how do you say, "toure de force"?? I love it, I love the specific particulars and that last stanza, hello.

Excellent senryu! Wish I could have been that creative :D

Enjoyed your mini bio and the poetic wrap-up, Glenn. I had no doubt that you would excel with this prompt and glad you went where you did.

What creative visual presentation. I particularly like the way each section is left-aligned, but for 1968, which is backward-stairsteps, signifying a regression of some sort.

Seems like those 60s were fast and furious for you, Glenn. You packed a lot into that decade. I thoroughly enjoyed this.

thanks for sharing. the 60s were tough years here too.

Thank you for sharing so much of yourself. I had you at about 10 years younger. Sooo very jealous you saw Elvis. I was 14 when he died and it broke my little heart.

So sad you lost your mom so early.

I appreciate how you structure your poems.

That's my favorite of all your poems that I have read. A wow experience, reading that.

The ups and downs, successes and progresses - such is a life lived fully. A very enjoyable read, Glenn.

Life without challenge
is a road of
quicksand
in the end..
as far as
i for one
see now..
all those challenges
make you the survivor
you are now.. and the
SpiRit comes through
loud and clear
in all of your
efforts
of making
Life Art..
so many ways
to do that truly
iN liGht..
and sadly
it is among
the sofTest
lives
that
sink the
deepest
without
challenge..
and lose
life as art..
man.. i'm glad
i didn't have it all
then.. either.. as
i learn
all is
not what
it is cracked
UP to be.. in terms
of what i am spoon-
fed from birth.. outcasts
make the cast in
the end.. sMiles..
Glenn..:)