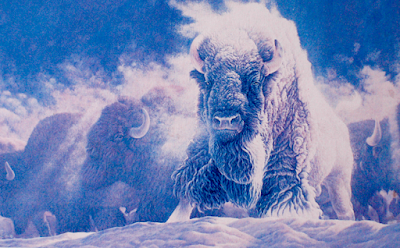 “Many of you friends & loyal readers of this epic poetic series
have come along mid-plot, & struggle to keep the characters
straight, & wonder about the story. So for the next few OLN,
I will do a brief review of the events posted over several years.”
--Glenn.

One:  Monarch--Introduction of a vast buffalo herd that is surging
across some railroad tracks, stretched out to both horizons, as a
speeding train has difficulty stopping, killing dozens of animals
before it halts, with a huge albino bull buffalo overlooking the
scene.

Two: The Long Death--Opening on buffalo hunters slaughtering part
of a herd. Cut to thirty foot high piles of buffalo bones & skulls bleaching
in the cruel sun. Cut to an encampment where the hunters have skinned
the pelts & staked them out to dry. Cut to a railroad siding where thousands
of hides & pelts are sold, stored in box cars, & shipped east. Cut to the
great albino bull galloping through the middle of the hunters, stomping
pelts & breaking stakes. Cut to the bull on a hilltop, looking down on the
town of Blackthorne, shimmering blue below.

Three: Pas Peregrinus--Detailed description of the town of Blackthorne,
with three loafers lounging midday on the porch of the China Doll
Saloon. One of them stares off to the east, out into the heat haze, &
announces, “Rider coming.”

Four: Arrival--The idlers watch as a lone rider comes into town. The stranger
is heavily armed, & is dressed in dirty buckskins with both Mexican &
Indian attire; a buffalo hunter, who is riding a tall roan stallion, & is
accompanied by a large black wolf-like dog. The newcomer reins up in front
of Wallace’s General Store, reading a sign, OUT TO LUNCH.

Five: Inquisition--The stranger dismounts, notices the three men at the Saloon,
then walks his stallion & dog over to them, wrap-reining at the hitch in front of
them. He has a .55-120 Sharps buffalo rifle in a scabbard, & is wearing a Colt
.41 Thunderer on his right hip, & a sawed off shotgun on his left. He inquires,
“Is the old Buck ranch still deserted?”

Six: Conversation--The porch riders tell him that as far as they know the old
Buck place has been deserted for 15 years, ever since Bill Buck died. They
tell him that the “big man” in town is Cash Bronson, who owns the saloon,
the hotel, & a stage & freight line, & runs the largest cattle & horse ranch
in the territory, the Triple B. He would love to buy the Buck place, but it
seems the new owner has been an absentee for years. The stranger
thanks them, mounts up & lopes off west out of town.

Seven: Homecoming--The stranger rode several miles out of town, & then
up into the foothills, up to the abandoned Buck ranch--riding through a
broken hinge gate, under a bullet-riddled sign on the overhead pillar that
read ANTLERED BUCK.

Eight: Remembrance--The stranger stops in front of a ramshackle two-
story ranch house, recalling his childhood, romping with his collie, loving
his mother, Sarah, & father, William. Cut to when Roddy was 8 years old,
during the traumatic birth of his younger brother, when Bear Woman, their
hired domestic, acted as midwife.

Nine: Eulogy--A funeral at the Buck family cemetery. Sarah had died in
childbirth, & Bear Woman held the newborn, Jack, feeding him goat’s
milk from a bottle. Cut to a year later at the breakfast table, with Bear
Woman cooking bacon, eggs, & pancakes. Little Jack called her,
“Ma-Ma”, & big Bill Buck, lost in a whiskey haze, stormed out of the
kitchen, followed by a distraught 9 year old Roddy.

Ten: Departure--Young Rod Buck, at 17 years old, packed up & was
leaving behind the pain & sadness, the drunkenness of his father, the
disintegration of the ranch--anxious to light out. He would ride west
to become a buffalo hunter. He told Bear Woman that he had to leave,
“before I go crazy, or hurt the old man.”  She wanted him to stay. Jack,
now 9 years old promises to come & join Rod in a couple years. She
said to Rod, as he left, “May you find good medicine out in the bloody
sea of grass.”

Great to have this recapture... I'm sure I might have missed a few... and it's always good with a recap.. I have been waiting for the white buffalo though

Gosh! can't wait to read what happens next :D

Thank you for this, Glenn. I confess that because of the two-week hiatus between each episode (of course, age has nothing to do with it) the story line was becoming a bit muddled for me.

Thanks for the recap Glenn ~ Now I am understanding the series ~

Such a fascinating epic and you really have a long narrative poem in here. Look forward to reading it in instalments.

Your review is a great idea, Glenn

Oh, I am so glad you presented this outline..I think I may have missed one or two. Thanks for sharing this with us the readers.

What a nice response for my idea of doing a review. We are up to episode 54 at present, so doing ten per OLN, it'll take about 4 more nights to catch everyone up. Thanks in advance for your interest & support.

somewhere we're the telomeres
no fears, just salt licks
and what we wish
were the combinations
we memorized
as the way to here
some place where
we are the tell
of mirrors...

great connective tissue here
not sure you can do this without CGI
but for those predisposed to hallucinogenics
well this swell, we can surf...

Yes, Edward, we'll use CGI, 4K digital cameras & drones to make this saga come to life on the screen; look at any of the past episodes to see the complex shot assignments & sound cues, plus the poetry & dialogue.

Thanks for the update, Glenn, as I have only recently started to read your work, through joining the dVerse Poets Pub. I was shocked at the devastation of the buffalo herds and love the description of the town (I love the name of the saloon - although I have a phobia of china dolls!) and the dog. I look forward to the next instalment.

I'm glad you wrote this. This is a massive project and my hope is that very soon it will be shot and bring back proper Westerns. Kudos Sir!

Thank you for the recap. Good to see you again.

Oh my....what an amazing story. Thanks for the recap as I was not there at the beginning.....will be ready for the continuance!

Ah pain.. sends
a story forward
faster than
before
in
comfort..
Western
struggles
for new..
Eastern
peace for
same.. iT
aLL changes
as Free.. desert
moon shines
with
Sun..:)