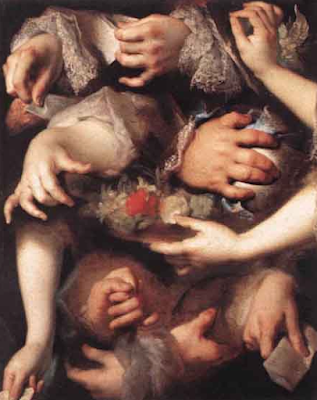 “People say I have the most beautiful hands,”
--Donald J. Trump

There is a cave deep in the Sahara
where 10,000 years ago primitive men
traced their hands on the wall--
interspersed with tiny hand prints, even
smaller than an infant’s hands, where
upon investigation, those prints turned
out to be the forefeet of the desert monitor
lizard, conjuring mystery & wonder.

Makes me think about dolphins,
who have large brains, with intelligence
and intellectual capacity close to our own,
but possessing no hands, so they do not
have the ability to either build or destroy
things--they just pass through their
environment without changing it. Our opposable
thumbs give us the opportunity to create
and utilize tools, whereby the planet is forever altered.

When studying anatomy for Art,
it is the hands that are the most
difficult to draw or sculpt. I loved
the sensitivity used in the movie
BEN HUR, where only the hands
of Jesus were photographed handing
a cup of water to Judah as he was
marched in chains to the Roman galleys.

Hands as metaphors & indicators dominate so much of our
communicative phrasing, from hand-me-down genetics
to surrendering with our hands up,
to a round of audience applause,
to points of laterality,
to rotating indicators on time pieces,
to our individualistic patterns of cursive,
to creating meals from scratch,
to cards held by players,
to using fists for defense or assault,
to grasping & shaking as a greeting,
to asking for a pledge to wed,
to a deftness & expertise in performing tasks,
to being a specific kind of laborer,
to being close by for support,
to cajole or force another’s action,
to achieve overwhelmingly,
to flail in the air out of hopelessness,
to wring & twitch out of desperation, or
to pray & supplicate.

Without hands we would
have no art, skyscrapers or
machines; quite the quandary. 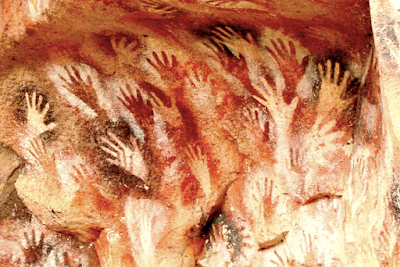 Hands are the one distinguishing factor... the one thing that differs... so apt... we are indeed at the hands of our hands... and poetry without hands, imagine that.

"Makes me think about dolphins,
who have large brains, with intelligence
and intellectual capacity close to our own,
but possessing no hands, so they do not
have the ability to either build or destroy"

What a profound thought.

This is my favorite line: "to wring & twitch out of desperation, or" ... I like the idea of "w/ringing and twitching OR" ... whatever "or" might be.

Just so love the stanza about dolphins ..... what a great angle. To be honest that's almost a poem in its own right ... also some great lines in the hand-me-downs. Nice work

This is so good. I've missed reading your work, without realizing it until just now. How ingenious to begin with a quote from Trump and continue with info re dolphins and other brilliance. Very cool.

Hands DO have the power to build, or destroy. I love the listings here...the way our hands work.

Well, I won't bother repeating what I said out loud after reading the Donald Trump quote…but I so enjoyed your poem and how it took you to interesting places like the minds of dolphins. The list of metaphors and duties of hands in the last stanza was awesome.

What wonderful things the hands can do, such power and beauty to create art ~

And I agree, hands are indeed the most difficult to draw and sculpt ~

Enjoyed your reading too Glenn ~ Have a wonderful evening ~

I went the same route, Glenn... to cave paintings. Something so elemental and essential about this. Also really liked the line about dolphins gliding through their environments. Some great images here.

That last stanza was especially phenomenal..!!

You offer more than poems here, Glenn! You present a study in wisdom. Thanks for that!

You have definitely described well the many ways that hands can communicate...each of them would be worthy of its own poem, in fact! Bravo for an all encompassing and rich poem.

"When studying anatomy for Art,
it is the hands that are the most
difficult to draw or sculpt."
My son would agree as just yesterday he was working on a 3D digital model and complained that the hand and wrist were giving him trouble.

I'll skip my Trump comment too... But I loved all the ways you exalt hands and how you offered myriad examples of their beauty and expertise.

Such a stunning poem, Glenn. I think everyone else has said what I wanted to say.

A brilliant and outstanding read, it starts of in an intriguing way and ends likewise. Warm greetings!

no art, skyscrapers or
machines; quite the quandary

Very true! Hands needed for both intricate or simple operations. A bigger tragedy of no hands compared to that of no legs. Exhaustively dealt with Glenn!

if only we all used our hands for good

Hands are truly remarkable and I am so grateful for all the things we can do with them. But, what struck me most about your poem is the part about the dolphins. They do neither create or destroy with their hands. Very interesting and I think it sheds new light on their purpose here.