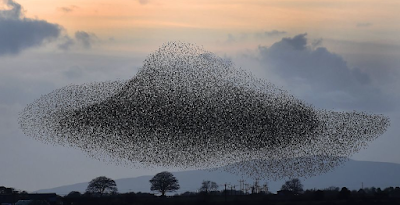 With Spring, beyond its fecundity, comes wings
of every conceivable variety; fluttering

on beauteous artful flights of Monarch butterflies,
or humming drolly on wedges of dirt-brown munching moths,
or flapping madly on descents of gnarly bats spinning
out of dark caverns, or an audacious glimpse of a majestic
airie of bald eagles, or a clever cast of hungry peregrines
dropping down like feathered missiles from the electric
azure ether to snatch rodents, or a bedazzling bevy
of snow-white doves perching in the pink
blossoms of the tulip tree in our backyard,
or that gobbling gaggle of wild turkeys hav-
ing a squawk-off with an exotic muster of
albino peacocks on a ranch near the beach
above Hilo, or a frightened covey of quail
scurrying out of the tall grass along a dense forest trail, or a quacking
brace of green-headed mallards flying dangerously low over some
concealed blinds ready to give buckshot greetings, or a
curt kettle of red-tailed hawks floating on thermals like
bellicose kites on their daily rabbit raids, or a noisy
colony of gray Pacific gulls at the beach fighting
a malicious murder of crows for scraps of
stale Wonder bread that we had tossed into
kelp-kissed negative ionic breezes, or amidst
a raucous riot of tropical colors spread out
over San Francisco Bay as frantic flocks
of conures glide masterfully around the
top of the Coit tower--              all flapping toward the crescendo,
the epilogue,
as wondrous wedges,
garrulous gaggles,
sensuous skeins,
flitting flushes,
skimming scolds,
scintillating sieges, &
wily wisps
of divers birds create a sky ballet to the angelic orchestrations provided by the
restless winds, while swirling & twisting into living abstract ciphers, performing
elaborate murmurations that never cease to enthrall & entertain.

Oh Glenn... you put me there in that avian beauty... how wonderful, how absolutely gorgeous....Especially that finale.

Wow you used a lot of bird groups, luv the shape of the poem too

Beautiful shape and gorgeous words describing a world I will never see, but you have given me in your poem 😊

This is splendid work here :D left me breathless...!!

Love the passion and zeal, including the shape of your words on the screen ~

These are all my favorites:

That was a pretty majestic presentation, yourself, Sir.

Quite an in-depth piece of work really. Well done.

I love the movement in your swarm of words, Glenn! Well done!

Entranced by this, entirely.
You got so many of the group names in there, and used them so beautifully.
LOVE this:
"wings
of every conceivable variety; fluttering"

And your poem spills like a fluttering of wings, a murmuration of swallows, a flock...

Bravo! Where mine went to humor, yours went to beauty with incredible visions of the amazing variety of avian groupings. LOVE it!!

LOVE this, especially the wild turkeys having a "squawk-off" with the albino peacocks...a fine feathered poem!

I agree with Gayle, Bravo! Bravo! Bravo! (Applause and poesies thrown at the stage). I want to live in the world of this poem, in the ecstatic flying wing beat joy of abundance!

wily wisps of divers birds create a sky ballet
to the angelic orchestrations provided by the
restless winds,

Beautifully described of the gracefulness of flight. A classic ending Glenn!

The shape of this poem is beautiful. This is absolutely one of your best poems ever - the change of tone, subject, viewpoint - one of your best, truly and a most beautiful and exultant poems of all those on the dVerse road today. I had to read this thrice and enjoyed it more every reading. I hope you will share more of the Glenn and the heart that wrote this. Listening to the birds around and seeing them in the air just dramatized this joy of a poem. Please sir, I want some more.

I think you've got 'em all! And it's wonderful to hear it in your voice, Glenn.

This is fabulous and I am a bird lover. Using your peripheral view you captured such beauty. Hey, I wrote something on my blog you might be interested in when you get a chance.

A sky ballet indeed. You have such a way with words, imagery, and though progression. I am right there with you and it is a joy.
Bellicose kites......well those two words jump out at me here in Bermuda. Good Friday is a national holiday and there is a tradition of kite flying -- but not just kite flying. Folks make their own kites and they add, somewhere on the kite, a cross in reference to Easter, and they also make them as "hummers." They dance and battle in the sky and hum loudly too! Bellicose kites....I shall remember those words as we join in for the the first time, in this island tradition. We shall return to Boston on Tuesday.....my reading and writing shall be back to a more normal schedule.....Bermuda beguiles and I am so late to the bar! :(

Wow, you really used a lovely collection of collective nouns & made me appreciate the beauty in nature! I enjoyed this, Glenn!

Ah.. a UniVerse
of Birds..
encyclopedia
of words floWinG
flying freely among
sentences
that move
no less
than
WinGs
that fly hiGher
than lower.. my friEnd..:)