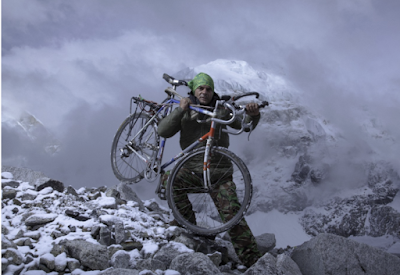 “It’s not the mountain that we conquer
but ourselves.”--Edmund Hillary.

In 218 BC, one of the most famous mountain crossings
in history, was done by Hannibal, who at 29 years old,
became a general, fighting against the Romans. He led
his Carthaginians, made up mostly of Africans and
Iberians, which included dozens of war elephants, clear
across three passes in the Alps, using two autumn months
to do it, descending into the Po Valley before marching on Rome.

In 73 AD, after Spartacus escaped from a Ludi in Capua,
leading 200 gladiators in flight--they made their encampment
on Mt. Vesuvius. Their ranks swelled quickly. Soon, a Roman
cohort, lead by Praetor Glaber, bivouacked at the base of the
the mountain. Spartacus. & his men, repelled down a steep cliff
that was not observed, outflanked them, & won the first battle of
the Third Servile War.

My neighbor, Mt. Rainier, was first dis-
covered by the Meso-Indian tribe from the
Nertal Islands in 200 AD. Geologists tell us that
Mt. Rainier was formed by a super massive geo-thermal
event in 150 AD. One of the native myths claimed that the Mt.
is honeycombed with hundreds of man-made tunnels that lead down
to the center of the earth where a sacred tribe of demi-gods reside.
The Indians called the mountain Talol, then
Tahoma. In 1792, explorer George Vancouver
renamed it Rainier, after an Admiral friend of
his. It has 25 glaciers, & has 2 million visitors
a year.

Mt. Everest, more than 29,000 feet in height, is the world’s
tallest mountain--& it is very dangerous. Hundreds of people
have perished on its unforgiving slopes. They officially started
trying to climb it in 1921, but of course the Sherpas had been
climbing it for centuries, just for the hell of it. From then through
the 30’s & 40’s, they had dozens of failed attempts, but it was
finally crested in 1953 by Edmund Hillary, who was
knighted for it. I read where for only $1,800 dollars,
anyone can hook up with a tourist climbing group.
I think I’d rather go to Tahiti.

Man has a need to
climb every mountain just
because they are there.

It amazes me when men attempts to climb the highest mountains for the sheet adventure of it ~ Maybe this is akin to landing on the moon, and telling everyone, here is the flag and I have been here ~ If I have the money and energy, I would take that offer to climb up, smiles ~

A high-altitude poem about epic mountains, Glenn! Thanks for sharing this excellent post. I love me a mountain but I too would choose Tahiti over Everest any day.

So very true, Glenn! Man definitely is up for any challenge. I am sure Mount Rainer is a challenge that few mountain climbers in Washington State can pass by! Where there are mountains there are climbers. And yes, Everest is the ultimate!

So true! We can definitely conquer heights if we want to.

This is my best misreading ever:

"... made up mostly of Africans and librarians" :)

So much "yummy" for this word: "bivouacked"

I love how your poems are looking these days. I've watched you for years, and the evolution in style has been such a treat to observe. Your spacing and visual presentation really is a pleasure to savor.

"It was once home to a fire god,
& a Shinto goddess of Wisdom" ... This is my favorite.

Ooh, sexy:
"the home of the Luminous Maiden,
who was reputed to have led an emperor to his doom"

I also like these sections:
"The Indians called the mountain Talol"
"Hundreds of people
have perished on its unforgiving slopes."
"but of course the Sherpas"

Ha ha ha. I am dying over the ending. This, going into the haiku:
"finally crested in 1953 by Edmund Hillary, who was
knighted for it. I read where for only $1,800 dollars,
anyone can hook up with a tourist climbing group.
I think I’d rather go to Tahiti."

So good, Glenn. It's always a treat to come visit you.

Fuji-san was my ultimate and climbed it years ago when I had breath and strong legs. Being born in the piedmont of NC, I am always torn between the mountains the ocean. So many of our eastern mountains were settled by the Scottish-Irish folk escaping persecution and homesick for their own mountains. And so very true - we humans climb, cross, fly around over and through things just because we can.

Climbing a mountain is the last thing I can think of wanting to do but I loved your informational haibun, Glenn. And how true...we take on challenges like Everest simply because it's there and begging to be summited.

I live in a flat place. There are no mountains or hills, just little undulations now and then. Mountains are amazing and daunting. Your writing has inspired me to look for a mountain to climb! By the way - the 'I'm not a robot' widget asked me to pick out all the images with mountains.

You wrote about the mountains that have been conquered and I wrote about a mountain that has not :). Your poem is robust with a massive foundation in history, like a mountain. I would have loved to see those war elephants but not the carnage wrought.

As I've said before, I learn so much when I visit here! And the way you express these facts draws me to read further! The end verse always says it for me, this no exception!

because they are there.

The classic attraction to conquer is always the reason. To think a NZ bee-keeper could do it a few days before the Queen's coronation in 1953. Exhaustive take on famous mountain conquests Glenn!