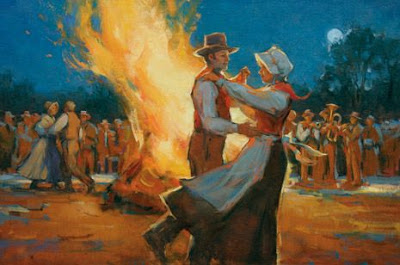 “What we dread most, in the face of the impending
debacle, is that we may have to give up our
gadgets.”--Henry Miller.

1(wide shot) two riders pushing hard, silhouetted
against a fiery Saturday’s sunset, that had turned
the prairie’s chest to yellow-orange.
2(sound cue) banjo and guitar and violins over
hoof beats.
3(medium wide overhead crane shot) Buck and
Johnny rein up at the Grange Hall. Cheewa,
almost invisible in the soft darkness, began
barking.
4(sound cue) harmonica over a cat’s screech.
5(two shot) The dog had flushed out a black cat.
He chased it, a race between two shadows, through
a crack between two boards on the wall of an
unpainted warehouse adjacent to them.
6(tight two-shot) The two men moved stiffly in their
new store bought shirts. Buck wore a blue shirt, new
denim trousers, a string tie with a turquoise bolo,
and an old pair of boots shined to a brown gloss.
The Eagle wore an earth green shirt, open at the
neck, with the starched fold still in it, and a pair
of clean, but worn jeans. They both wore their
weapons and old hats.
7(cut to a medium wide shot) the Grange doors
were wide open, with a blazing lantern twinkling
on each side of them; the commotion from the
folks inside flooded the empty streets in waves.
They tied down in front of the BRONSON HOUSE.
Most of the hitching rails were occupied. A half
score of wagons and carriages stood alongside
the hall.
8(sound cue) piano, banjo, violin’s fiddling over
the crowd’s hubub.
9(two-shot) Johnny, over Buck’s shoulder: Must
be every sodbuster, cowhand and drifter in the
territory here tonight. He hiked up his britches.
Buck: Yup, everyone came to see the elephant.
The Eagle pulled an old silver watch from his worn
pocket: Almost eight o’clock--hell of a way to start
a romance.
10(medium close up) Buck: Uh-huh--my turn to screw
the heifer. You head on in. I’ll go face the music. I
may return by myself.
11(two-shot) Johnny: OK, boss. I’ll meet you there.
Let’s hope she’s in an understanding mood tonight.
12(medium wide shot) Johnny strutted off in the direction
of the Grange Hall, brushing the trail dust off himself.
13( cut to wide shot) Buck stood in front of the General
Store. Salina was not there. He peered into the large
front window. The place was empty and dark.
14(overhead drone shot) Wallace had built their living
quarters out from the store, shaping an L out of the
building. Smoke curled up from its chimney. We see
Buck walking around to the back. Their home was
the northwest corner of the building. A sprawling
covered front porch stood next to a tall hump-backed
oak.
15(cut to a dolly shot) as Buck approached the porch.
We discover Salina sitting on a slider, wearing a shawl,
with her arms folded, smoking a rolled cigarette.
16(sound cue) harmonica over grandfather clock
ticking loudly.
17(two shot) Salina, over Buck’s shoulder: Well, here
you are, big boy. What’s the matter, you lose your
watch?
Buck: I’m so sorry that I’m late.
Salina: Yeah, I’m sorry too. You kind of left me in
the lurch.
Buck: I got busy working on the roof of the bunk
house, and I lost track of time. I feel like an asshole.
Salina: You look just like one at the moment.
They stared at each other for a minute. She smiled
first, and his smile followed suit.
Buck: So...do we still have a date, or do I go alone
with my tail between my legs?
Salina: Did you bring your dog?
Buck: Sure did--he and Johnny are over at the Grange.
Salina: Other than being late, it seems like you held
up your end. So yes, our first date can now kick into
gear. There just are a couple of things we need to
talk about first.
Buck: OK--shoot.

Posted over at dVerse Poets Pub OLN
Posted by Glenn Buttkus at 11:55 AM

Oh... I cannot wait what she has to say. Maybe it has something to do with Thor...
I cannot see how the dance can go ahead without some knuckles or guns.
Well we have to wait for the next installment.

Ha! I'll bet Salina lays down the law to him!

This has to be the coolest *about to begin first date* ever!❤️ Love the fact that she's both sassy and warm at the same time during her dialogue with Buck. Can't wait to read what happens next!❤️

Good foreshadowing with that last word, and I love the atmospheric detail and the various perspectives you give for texture. I'm not used to reading screenplays but this worked well as prose poetry.

"Buck: I got busy working on the roof of the bunk
house, and I lost track of time. I feel like an asshole.
Salina: You look just like one at the moment."

I enjoy when you created these scripts or screenplays Glenn. Always engaging! Ever had one cast and filmed? If not, you should Mr.Director...

and the libido-laden tension builds... I like screenplay format. It lends a lot to the atmosphere.

This one took me back to the days of listening to the Lone Ranger on the AM Radio!

Oh my goodness, what happens next? I have to say the lady is a tough charmer.

Oh yes, leave us in suspense!
The details are divine and pull me into the setting so easily. I especially felt this...."the commotion from the
folks inside flooded the empty streets in waves"

Way left field comment, but given the Henry Miller quote, I'd say this pair were dancing close to a fire neither one of them understands but will.

Nice line from Salina: "You look just like one at the moment." At least she didn't completely reject him.

love the undercurrent of playfulness and familiarity from a previous encounter between these two, when there is humour in a courtship, love forms like a strong forged metal.

I'll bet penguins to pine nuts that she wants to discuss annuities, or perhaps actuarial tables with him. Those were very prominent topics in the old west, the true grit upon which the land was subdued...
Seriously.. this continues to be fun, I love Buck and Salina, a couple all full of sassafrass and apple stars. I still feel bad about Thor's former girl getting pistol whipped, I hope he larns his lesson.

As it happens, the pistol whipped whore from earlier was Thor's younger brother, Paul's, girlfriend. A serialized tale like this one can be hard to keep up on character details. I'm just grateful you remember that a woman was pistol whipped. I wrote the novel that this series is based on in 1967--so working back through it is fun for me too.

So cool. I will try and take the time and read through this...