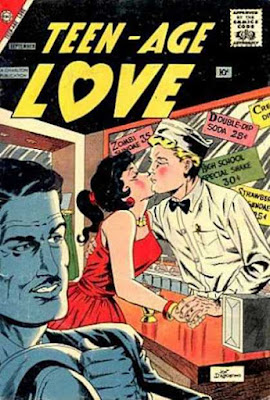 Tommy was blind and deaf,
yet he became a pinball wizard,
said the Who.
Dogs and cats like to be petted,
chickens too.

As a teenager, hormones raging, heading
to a local passion pit for the
submarine races, I could hardly wait
to touch my date; what was called petting.

Kids today hook-up, whatever that involves
I remember when holding hands was a big deal--
but I must say that all that teasing and foreplay
caused a raging case of blue balls--
a malady from the 50’s.

The 60’s led us to
What’s your sign? Let’s fuck!,
the incredible no-bra look, communes,
topless barber shops, free love,
and the best decade of rock and roll ever.
“Heal me”, indeed.

For septuagenarians,
there is still actual touch,
deeper, more meaningful love,
and wisdom--
that’s the rumor.

Posted over at dVerse Poets Pub
Posted by Glenn Buttkus at 11:47 AM

That petting and innocent kissing... I think kids still do it actually, maybe we just imagine it's all so different... But I know that probably parents are more understanding to children taking their conquests home than we ever were.

Whoa, that was a rollercoaster ride through sexual manners in the 20th century. I hope the last stanza holds true.

Nice remembrance and nice last line about the rumor.

The means and gadgets may be different but kids today still thrill to the actual date, with kissing and what not. Love the different stages of our lives with regards to romance, smiles.

Did you hear me guffaw? A rumour, indeed. Touch, I fear, is an endangered species in age.

A tour-de-force! Brilliant images, and a sardonic tone that evokes a reminiscent mood without patronizing the present generation. Cool write!

Wasn't it all just a fuckin' blast!! Let's hear it for the septuagenarians... but please make it loud, my hearing is shit! Nice write Glenn!

Love has certainly taken its course over the decades, actually centuries. An enigma for sure! You are right about the music of the 60's. Nothing will ever compare!

Teenage Love - smiling at the comic cover. I am sure teenage love is still out there but, I think it's changed due to modern technology. I don't know how much actual hand holding is going on as it seems they are always holding a phone.

You took a touching trip back in time with this one. Very well done. There is nothing better than the human touch.

The beginning of your poem reads as if it had been written by a rampant pubescent teenager with ADHD, Glenn! I’d never heard of petting being called submarine races! I just missed the fifties and sixties but the seventies were brilliant.

Just brilliant. Love the pace of this, the no-holds barred grip of sexual journeys and then that last stanza is the real kicker ~ stopping us in our tracks, showing us that whatever age. It's still a thing!

Hmm.. at Least in the Dance
Halls Holding Hands
is replaced
now
with
Bootie
Dances.. i guess
the Advantage is
No catching Colds
From Holding Hands
And Clothes are the Condom
that counts
on the
Dance
Floor
at Least..
And the 'Clothed Touch'
Seems to Work-out okay..;)

Bold in content and style, I wasn't surprised you combined your wonderful poem with a bright cartoon image. I too liked the journey you've written from youth to maturity. I don't mind admitting as my years have added (and added, and added) up, I'm pleased to acknowledge a surer, more meaningful yet subtle touch is my preference :)