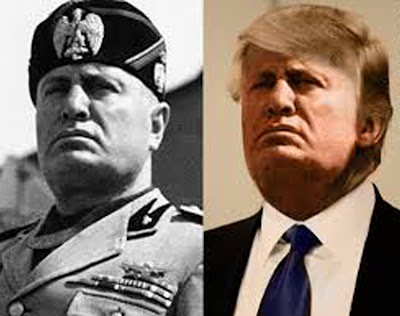 “I will fight for you with every breath in my body,
and I will never, ever let you down.”
--Donald J. Trump.

T45: I won because I love the poorly educated.
As true as global warming.

T45: Everybody loves me because I’ve always been
successful--a kick in truth’s junk.

BM: A dictator can be loved; people love a strong man.
Delusion sold as truth.

T45: We will no longer surrender America the illusion
of globalism--truth as a carbuncle.

BM: Democracy is when the people are given the
illusion of sovereignty.--truth being sodomized.

T45: To be patriotic, there is no room for prejudice.
The truth masquerading as a lie.

BM: If people disagree with you, destroy them.
Truth twisted into a pretzel.

T45: The press are the most dishonest, sleazy,
terrible people I’ve met--antithesis of truth.

BM: Italy’s press remains free, as long as it supports
the regime--Truth as Fascist puppets.

They are both deranged buffoons, and we already
know what his people did to Mussolini.

Posted over at dVerse Poets Pub MTB
Posted by Glenn Buttkus at 1:26 PM

I like this a lot. For me, this is an effective poem and as ghazal, especially a "modern" one I believe it works too. It doesn't exactly conform but it has a sense of ghazal. It is certainly the kind of call and response one might do if one were drinking with someone of the same mindset. A comparison of dictators in times when the government of the people is lost and a mockery is made of truth! Strong stuff and to my mind necessary. Pity, it isn't accepted by the folks who refuse to listen and/or learn.

They are best buddies alright and I hope they twist into a pretzel. I also like the conversational theme, as if both are really have a chat.

Oh yes dude - I knew you’d find a way to scald Trump’s ass with a Ghazal... love it. RAGE ON BROS!

The resemblance both in looks and ways is creepy. The title sets the tone. I love your nicknames for them. The sheer # of lies and the fact that his cretin followers yet follows is frightening. As usual, I appreciate your formatting.

This was really good. I loved the title too! 🙂

I loved this. And I note that (while I'm not sure if it happens in the ghazal as such) there is a great tradition in Arabic poetry of scathing political rants!

The photoshop is flattering to Trump who never looks determined, just self-satisfied.

Glenn, the historical parallels are terrifying. He reminds me of many dictators. His nationalism, anti-intellectualism, bigotry, misogyny, homophobia, xenophobia, propaganda, disinformation campaigns, and psychosis make him the perfect tool of corporations posting record-breaking profits. We have replaced the divine right of kings with a golden dystopia of greed for the 1% who are now so rich they, like corporations, hoard piles of cash because they have run out of things to spend it on. When even the Economist says we’re living in an oligarchy we should be very afraid. Keep speaking truth to power!