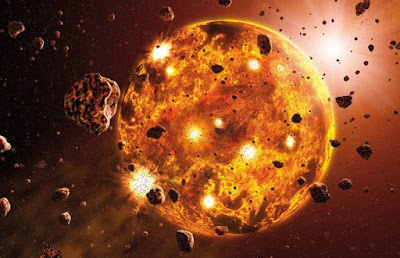 “The time is past when mankind can selfishly draw
down on Earth’s exhaustible resources. This planet
is not a Commodity.”--Francois Hollande,
President of the French Republic.

3.54 billion years ago, this planet was just a molten
ball, and it had no surface oxygen. It took millions
of years to cool, to form a crust, and cover itself
with oceans.

Life began in the dark womb depths of the sea.
Prehistoric man emerged 3 million years ago.
Science has tread on biblical Genesis for many
centuries. Mankind’s piece of the cosmic pie
chart is just a slender faint thread of the Great
Tapestry, a glaze on a grain of sand in the
Sahara of Time.

Plate tectonics continue to reshape oceans and
continents. From 3,000 years ago to the present,
Man has evolved into the dominant species, and
as such has become capable and guilty of
affecting global change, the biosphere, the Earth’s
surface, the hydrosphere, and the atmosphere.
Oh, what bad boys are we--now is there actually
time for redemption and reconciliation?

This old planet has
undergone drastic changes, like
the Ice Age; what’s next?

Posted over at dVerse Poets Pub Haibun
Posted by Glenn Buttkus at 6:01 PM

It shows just how invasive and parasitic we are to Mother Gaia. She suffers a million little cuts from us each day. We are bleeding her dry. I see oil as her blood. Those sinkholes are where the oil has been drained, leaving swiss cheese pockets that collapse. Short of a miracle (e.g. extraterrestrials) we are doomed.

And Jacques Chirac said in 2002 "Notre maison brûle et nous regardons ailleurs" Our house is burning and we take no notice.

I think nature will cure itself from us eventually... so whatever we can do to change is only for ourselves. If we just used a little selfishness (and understood what we have been doing) we might survive.

Yes, many changes over time. In the speck of time humans have existed, we've done so much damage, but unless we blow up the planet, it will survive, even though we will not.

Thieves of the
Very Air that
We BReatHE
What
Lungs
Come
Unprepared
to Own and Steal..:)

Sobering truth Glenn, truly a nature Haibun, to see ourselves outside of the big picture, this corner of the universe consciousness gone by our own foolishness, impervious, but less beautiful for our parting if we are not here to grasp what little we can. we need to reprogram ourselves.