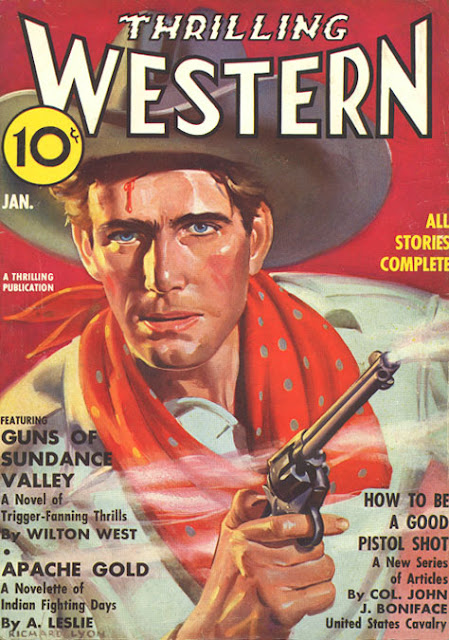 “Thoughts are the gun, words are the bullets,
the bullseye is heaven.”--Douglas Horton.

1(sound cue) French horn and kettle drum.
2(tight one-shot) Buck fired both pistols at once.
3(cut to overhead wide drone shot) and both
brigands went down like twin tin ducks.
4(two shot) one was dead, shot through the
temple, the other was wounded just above
the kidneys. He rolled over and fired back at
Buck.
5(sound cue) two loud simultaneous shots.
6(tight one shot) Before Buck saw the gunman’s
smoke, the Thunderer had thrown a bullet at him.
7(close-up) a sledge hammer hit Buck on the
side of his head.
8(sound cue) Coronet, one loud long note.
9( cut to overhead crane shot) both men
lurched forward, thudding to the dirt.
10(medium one-shot) When Johnny saw Buck fall,
he raised up, his shoulder open to the bone,
his forearm numb, his left knee cap crushed,
his rifle pointing at nothing.
11(close-up) Johnny: BUCK !!
12(one-shot) the Eagle felt his guts explode
as a rifle slug tore apart his abs. Johnny
clenched his teeth, dropped his Winchester,
sinking to his knees. Both hands went to his
screaming bowels, holding them in, keeping
them from rolling out into the dust.
13(medium wide shot) The firing stopped.
Johnny could hear the chickens, the windmill
creaking over the ranch well, and the sound
of the bunkhouse front door opening.
The gunman from the bunkhouse walked out
slowly onto the porch, his rifle cradled over his
left arm, and a pistol in his right hand.
14(sound cue) guitar.
15(medium close up) He was a big man, with a
dirty face and a shapeless hat.
16(medium wide shot) He took a few steps into
the yard, his eyes riveted on Johnny, waiting for
the Eagle to reach for the gun at his elbow; but
Johnny just sat there, his eyes to the ground,
holding his guts in. The brigand raised his pistol.
17(sound cue) three shots, fanned almost as one,
blasted across the yard.
18(one-shot) one bullet hit him in the throat, piercing
a hunk of chewing tobacco--one slug struck him
near his heart; blood splattered into the air. The third
hunk of angry lead hit him in the left eye. His body
leaped backwards, like someone had jerked him
with a rope. He pirouetted to the ground like he had
been run over by a stagecoach, dead in the dive.
19(cut to one-shot) Buck stood in the corral, blood
running from the gash in his temple, down over the
side of his face, the Thunderer and the Navy Colt
puffing faint blue smoke.
20(sound cue) piano and harmonica.
21(close-up) the sweat and blood stung in the
corner of his eyes, and he couldn’t focus on
anything. He shook his head violently. It didn’t
help. He stumbled over to the corral rails, and
leaned against them. He holstered the
Thunderer, returning it to its cage. He tossed the
Navy Colt into the dirt. The left side of his face
stung as the heat from the flaming ranch house
danced across it.
22(wide shot) He stared at the house. The flames
sprang hundreds of feet into a poppy red sky, as
the hungry fire consumed the barn and the house.
23(two-shot) the palomino carriage horse, his
gentle eyes on Buck, sat with his legs under him,
still harnessed to his dead companion.
Buck struggled over to Johnny. The Eagle did
not look up, kept staring at the ground holding his
stomach. Buck knelt down, wiping the blood from
his eyes, shaking his head as more rolled in from
the wound. The fires raged behind them.

Posted over at  dVerse Poets Pub OLN
Posted by Glenn Buttkus at 2:41 PM

Oh... this was a real shoot-out, and Buck is there alone. I hope that Johnny can be saved... those were really bad guys. Where Thor among them?

ohhhhhhh nooooooo. I do not want Johnny to die but it sure does not look good. And Buck....superficial head wounds can bleed profusely so I'm hoping that is what happened.
Eeeeegads, Glenn! You have me iso immersed in this story.......WHY do we have to wait until the next OLN????? You are my Zane Grey!

No, Thor was not among them. These were assassins, sent to destroy Buck and his ranch the day before the big meeting with Bronson. The plot thickens.

I like this quote to begin the shoot out:

“Thoughts are the gun, words are the bullets,
the bullseye is heaven.”--Douglas Horton.

I am sorry to read about Johnny and Buck.

I wouldn't wait another moment to exterminate Thor. Such dirty-dealing sludge he is! Can't even imagine getting hit in the head with a sledgehammer or have my guts literally falling out of my body. I pray both men survive. Guessing Johnny may not from his body positioning. Looking forward to the next chapter!

Past time to kill Thor off!

Such graphic descriptions of which you're known to be so excellent, Glenn! I can't imagine either one of them surviving their severe wounds. So sad. Someone's going to have to pay dearly for this!

I had to come over for a read. I sense some retaliation coming soon - someone is going to pay for this big time. I hear the shout of revenge in the backdrop. A man's flesh may be wounded but, the spirit is a mighty savior.

I've never read a poem/story like this. And it's a Western too. You're very talented and creative.