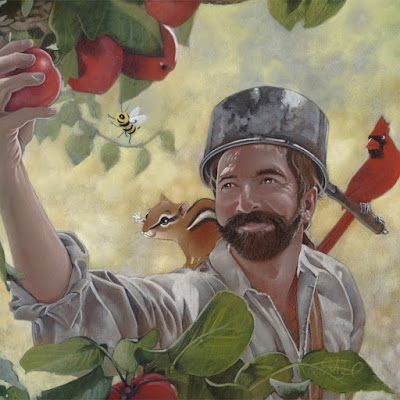 “Millions saw the apple fall, but it was Newton
who asked why.”--Bernard Baruch.

John Chapman was born during the Revolutionary
War in 1774, and he died in 1845 before America
erupted into the Civil War. His mother died when
he was a toddler. He didn’t meet his father until
1780, after the war. He was a strange child, always
the loner, who spent the bulk of his time outdoors.
He talked to animals, and would not kill an insect.
When he was 16, he left home and traveled West.

He began to build a reputation as a nurseryman.
Plants loved him. He had twin green thumbs. He
built nurseries wherever he roamed, leaving others
to run the businesses. He became a man of means,
but he dressed like a hobo, in rags and donated
clothes. He always wore a tin pot for a hat, and
he was nicknamed Johnny Appleseed.

When he was middle-aged he found religion.
He had a great speaking voice, and he became
quite the Orator. He became very eccentric,
often nearly naked, always sleeping outside
in the elements. He lived several times with
tribes of Native Americans.

Posted over at d'Verse Poets Pub
Posted by Glenn Buttkus at 1:21 PM

One human can ripple a big effect. Johnny is a great example of it. I bet he would have been an interesting person to talk with. The stories he could tell!

what a totally fascinating eccentric character ... thanks for the intro!

This was quite an entertaining and unique write!

Thank you for this historical haibun! I’ve learnt something new today. We need more Johnny Appleseeds in the world right now, Glenn.


Strange, isn't it, how one man can leave his footprint on eternity. The myth of Johnny Appleseed lives on from generation to generation. (I didn't know about the unusual hat!)

Some may have considered him a "seedy" character but his life sounds grand...nice to have twin green thumbs!

To leave nurseries and orchards in your wake is quite an achievement...

What an intriguing tale! I love how you have done his character sketch here. Your narrative is so pleasant to read.