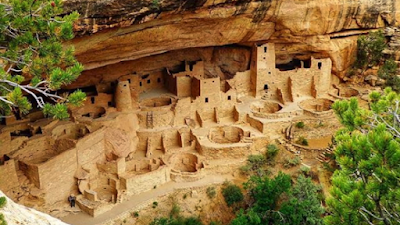 “Amid these centuries-old dwellings, we are
reminded that this was the first National Park
that was established in America.”--Barbara Bush.

As a kid, I was always fascinated by the
colorful paintings of pueblos, the stone
villages of the Navaho, Hopi and Ute. No skin
tepees for these folks, nope. Each house had
apartments, and could be inhabited by dozens
to hundreds.

In Montezuma County, Colorado, just kitty-
corner from Four Corners in the American
Southwest, there is a grand plateau where a
native population thrived for centuries. Teddy
Roosevelt made it a National Park in 1906. It
has 52,485 acres, over 5,000 extant sites, with
over 600 cliff dwellings. It is the largest
archaeological site in the United States. Taking
the family up there, it was a long steep drive, and
our old minivan overheated.

From 7500 B.C. to 1285 A.D., the Paleo-Indians of
the Stone Mountain complex farmed and hunted on
the vast mesa (green plateau in Spanish). They
designed and built their pueblos out in the open.
A severe drought in the 1100’s forced them to band
together pro-actively, and they began to build their
homes into the alcoves and rock overhangs in the
face of the canyon walls. The structures were made
of huge sandstone blocks, held together and
plastered with adobe mortar. They became very
clever at water conservation, aqueducts and food
storage. They all had guard towers, kivas and pit
rooms. They were built with windows facing south
in U,E, and L-shapes, with T-shaped doors. in 1285
another very severe drought overtook them and all
of the cliff dwellings were abandoned.

Eagles on tethers,
on Navaho arms, were both
pets and sentinels.

Posted over at d'Verse Poets P
Posted by Glenn Buttkus at 1:39 PM

I appreciate all the detail and history in this.

After years of longing to see them, I finally was privileged to have an opportunity to see Mesa Verde. How astounding! Since I was in my 60s at the time, I wondered how on earth the elders managed to access their cliffside dwellings! I think I'd like to sit in one of the dwellings at night and listen to their whispering spirits!

Oh Glenn.....I wish you were in my study with me now...you would have heard my audible sigh when I finished reading this. Mesa Verde has been on our list of must-sees for many years and somehow we've never made it there. Now, we are afraid we are not "spry" enough to do the climbing that would provide the most valuable views. But reading this, I am bound and determined that we shall plan a trip here for the future. Thank you thank you for strengthening my resolve. Your descriptive detail is wonderfully exciting. How I envy you that you've seen this spectacular place. We traveled to so much of the US....mainly camping and hiking. Bryce Canyon remains one of my most favorite and magical places. In recent years, we've taken to cruising and seeing other parts of the world. We have both recently talked that there are a few of the US national parks we've yet to get to...and they shall be given priority. You've spurred me on! :)

The pueblo looks like a sand castle from the sky. I have only been on the edge (I think) of that park many years ago as a child with my family. One day I would like to go back and see what I missed then.

Your description is wonderful. It makes me wanna visit this epic archeological heritage.

There's a lesson here for us all - the importance of bonding together in adversity, but also the fact that nature is stronger than all of us. We each have our watch-tower at the moment.

I remember our trip there in 1992... one amazing place after the other with Mesa Verde one of the best (it's hard to judge when you have Zion, Grand Canyon and Bryce on the same journey)

Another landscape I’d never heard of and will never see, and you brought it right to me, Glenn! Thank you for sharing the interesting facts - there is so much history in those rocks and I want to find out more. I love the idea of eagles as pets and sentinels.