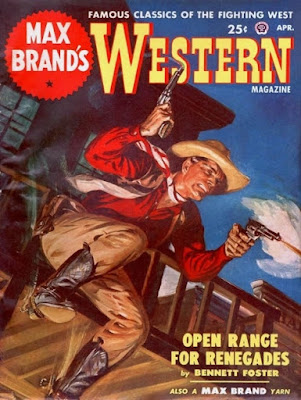 “Fast is fine, but accuracy is final.”--Wyatt Earp.

1(sound cue) guitar and violin.
2(overhead crane wide shot) Buck and the big Indian
faced off against Thor and several back-up gunsels.
3(medium close-up) Thor: Did you hear me, buffer. I
think you should apologize to my little brother.
4(tight close-up) Buck: We played this game before.
I’m going to get Ramos anyway, so why not just
hand him over and let him take his chances with the
Sheriff?
5(sound cue) castanets and harmonica.
6(tight close-up) Thor: I’ll tell you what...quit begging
like a little girl and let your iron do the talking.
7(medium close-up) Buck: Goddamn it, Thor. Ramos
just shot Mateo in cold blood. I’m taking him. You
gain nothing by pulling on me.
8(one-shot) over Buck’s shoulder, Thor: You know this
ain’t about Ramos. It’s about you and me.
Buck, over Thor’s shoulder: Well...I’m not backing
down this time.
9(sound cue) snare drum baps and coronet bleats over
chair scraping and crowd gasp.
Thor: That’s good to hear. I’ve found out that you’re
too big for me to whip. I now know my woman prefers
you to me. So we’re going to finally find out how fast
you are.
Buck: Fast enough to kill you.
Thor: Now’s the time, stepping closer.
10(medium wide shot) Buck and Thor at opposite edges
of the frame. a series of jump cuts, their eyes, their hands
hovering over their six-shooters.
11(sound cue) loud piano chords.
They watched each other’s eyes, like prize fighters,
waiting for that twitch, that message. Buck saw it first.
Both their right hands became a blur. Thor’s .38 fired
first, overlapped by Buck’s Colt barking in his right hand.
Thor’s bullet grazed Buck’s right shoulder, Buck’s lead
ripped apart Thor’s gun hand.
12(sound cue) French horn and bass drum.
13(one-shot) Thor stood there for a long moment,
his face contorted in disbelief and pain, looking
down at his pistol on the floor,
14(close-up) its polished handle covered in blood.
His little finger lying on the floor alongside it; just
lying there like a bloody sausage.
15(medium close-up) He raised his eyes to meet
Buck’s, and found himself staring down the barrel
of the Thunderer.
16(close-up) The smoking Colt aimed at the center
of the lens.
17(two-shot) Thor, snarling: Why didn’t you shoot
to kill?
Buck: Why didn’t you?
18(sound cue) saxophone.
19(cut to medium wide shot) Upstairs, a door burst
open, and Ramos charged out followed by two men.
20(two-shot) Buck’s sawed off seem to jump into his
left hand, and he fired once with both barrels, as he
dove for the floor. The Indian shot the short bully
guard in the chest before he could raise his shotgun
21(cut to upstairs) Ramos filled the smoky saloon with
his screaming, squealing like a throat-cut swine,
clutching at his stomach, staggering forward,
crashing through the railing,
22(upwards reverse dolly shot) as he plunged head
first fifteen feet to the floor.
23(camera holds as his body falls toward the lens)
24(sound cue) 280 pounds of gut-shot meat hitting
the bare floor.
25(medium wide shot) He hit with a horrible thunk.
Everyone in the room heard his neck snap. His
broken body shuddered, as all the nerves in it
fought with death, lying in a heap like a bison felled
with a .50 caliber Sharps. The Indian mercy shot
him in the head, and pieces of his brain splattered
for ten feet.
Every person in the room was on the floor behind
overturned tables. The two men upstairs hid behind
what was left of the railing. Paul Bronson had
scampered up the stairs, and hid in a room. All the
whores were out of sight. Playing cards and poker
chips were scattered on the floor. Buck was slowly
crawling toward the guard’s cubicle
26(sound cue) blues guitar slide.

Posted over at d'Verse Poets Pub OLN
Posted by Glenn Buttkus at 2:31 PM

Oh... I love that Thor was humiliated instead of shot dead... a one-handed Cowboy is not too cool... maybe there will be some peace in the end.

I enjoyed the way they faced off in this episode, Thor tries so hard to wind up Buck, but Buck stands his ground. Thor obviously hadn’t read the Wyatt Earp quote! I love this: ‘They watched each other’s eyes, like prize fighters, waiting for that twitch, that message.’ The gunfight is brutal, the finger ‘lying there like a bloody sausage’. So much action in this one. The neck snapping and the brain splattering made my stomach churn.

I'm glad you decided to keep your cinemagenic format. Perfect opening quote by Wyatt Earp. Such vivid descriptions of the carnage in all of its monstrous glory. Justice is seldom tidy. I think Thor did shoot to kill but missed. Big question: why is Buck crawling if he only has a grazed shoulder? I hope he didn't catch a bullet elsewhere?

Ohmy goodness, this is a great action scene Glenn. Looks like a movie playing in my mind.

OH MY GOD!!!! Well, I first copied these words
"They watched each other’s eyes, like prize fighters,
waiting for that twitch, that message. Buck saw it first.
Both their right hands became a blur." ... because I thought it was such excellent description. And THEN I got to the real bullets flying, and the hand and the finger and the body crashing over the railing....WOW! My husband walked in while I was groaning and asked what was up....I read that section to him aloud and it just got more and more frantic and high pitched and yeeeeeow! This was an AMAZING scene, Glenn! I do look forward to Thursday OLNs to read these! :)

Wow! A bit gory for my taste but I like the dialogue, suspense, and musical effects.

Wow, you really know how to write a scene. You quickly capture the readers attention and keep it throughout it's entirely. I could feel the tension before all hell broke out as the loud piano chords played. Every time I read one of these and I mean every time I wish I could see it play out on the big screen.

My you do delight in the gory ... very well written with graphic descriptions but gun slinging ain't my game baby!

p.s. Glenn, have you ever watched the TV series, "Justified"? Based on books by Elmore Leonard and created for TV by Graham Yost, it's 6 seasons of "cowboy" Raylan Givens, who isn't really a cowboy but wears the hat and boots and is a US Marshall assigned to Lexington, KY near where he grew up, in Harlan County, where he "dug coal" as a young man. As I read your story, I can see similarities between it and the series. I would LOVE to see Graham get ahold of your work and adapt it to a quality TV series!

Yes, "Jade Li", JUSTIFIED was one of my favorite shows, and Timothy Olyphant was terrific in it, but his previous series,DEADWOOD, comes closer to the Western spirit of my saga. But I love you thinking outside the box; thanks.

A great Saturday Western for sure!