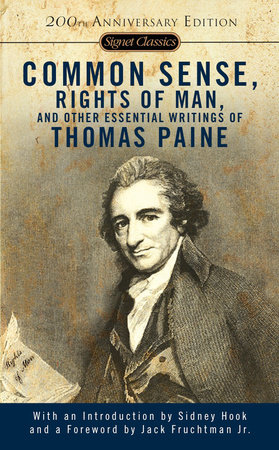 “Without the pen of Paine, the sword of Washington
would have been wielded in vain.”--John Adams.

My name is
Thomas Paine.
I fought for liberty
all my life.

I met Ben Franklin in Europe
in 1773. At his invitation. I came
to the American Colonies in 1775;
just in time for the revolution.
My Atlantic crossing had been perilous.
Five died of typhoid fever during the voyage.

I met Bob Aitican, a printer
who wanted to start an “American Magazine”,
with topical articles, versus the reprinted
British articles appearing in other publications.
Together we launched Pennsylvania Magazine.
I became the editor. It was very successful.
We were the first to come out against African Slavery.

After the Stamp Act, I became an angry critic
of King George III. I wrote a pamphlet called
Common Sense. Initially, it was so inflammatory,
I had to sign it as Anonymous, but it caught the
attention of all those who loved freedom. It was
used as a recruitment tool during the war. I used
my own name on it at that point. I was the one who
penned the phrase,These are the times to try men’s
souls. I was dubbed as the Father of the American
Revolution; a title I wore proudly.

I was considered a radical, liberal and muckraker
for the next decade. Then in 1789, the French
Revolution started, I went to France, and joined in.
I wrote The Rights of Man to fuel the resistance.
I was imprisoned, and barely escaped a death
sentence. I was saved by Ambassador James
Monroe. He helped me to get back home.

I was fortunate to live to age 72, dying with a wry
smile on my lips, knowing the impact my words
had made on History.

Thanks to Paine, the great
American eagle stayed aloft
for 250 years.

Posted over at d'Verse Poets Pub
Posted by Glenn Buttkus at 2:20 PM

So funny--I mentioned Thomas Paine to Anthony on the dVerse prompt page! He shows up several times in my Encyclopedia of the American Revolution, as does Common Sense

Very well done. :) I appreciate this.

What an educational piece on such an important figure in our history. I think you take after him, Glenn.

Very beautifully written. I love the perspective of history here in terms of revolution. It's amazing!

I'm happy too see something on the American Revolution. Thanks for history lesson Glenn. Fascinating!

Amazingly words can be revolutionary! You showed this very well!

you captured the powerful sense of revolution, Glenn!

From revolutionary to revered. A great journey.

You are my long-distance teacher of American History, Glenn - loved it!

And here we are again. Come back, Tom Paine! (K)