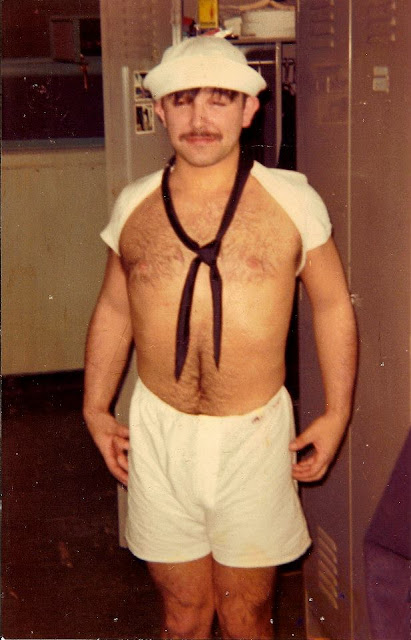 “A sailor is someone whose too smart to be in the
Army, and had never heard of the Coast Guard.”
--Anonymous

It was winter in 1967, at 2am. I’m in the Navy. I’m
22 years old. The war in Viet Nam is raging. I had
just switched rates from Airdale to Ship’s Company,
at NAS Miramar, in order to be a Captain’s Driver.
It was a cush-job.

I just returned from liberty. I was very inebriated.
Charlie and I had been to town, and this was the night
we decided to go to Tijuana for the first time. We went
to see the “donkey show”, but apparently they were
fresh out of amorous jackasses, because all we could
find were strip joints and bars.

After midnight, on the bus back to San Diego, a dozen
underage sailors were puking their guts out. The air was
ripe with vomit. As the bus would slow down, a tidal wave
of puke would roll up under our seat, making us lift our
feet.

Arriving at the barracks, I began to pound on lockers, and
as Charlie was on his knees throwing up, I straddled him
like a pony, and in stentorian tones I quoted Shakespeare.
Then we decided to take pictures. Charlie stripped down
to his underwear, and wore a hijacked bra on his head. I
stood tall in my underwear, with my T-shirt pulled up over
my shoulders, wearing my white hat and Navy tie.

Ravens greeted us
returning before sunrise,
cawing my whole name.

Posted over at d'Verse Poets Pub
Posted by Glenn Buttkus at 2:37 PM

ha. i hope that is not the donkey show i think it is. oh my.
ah. glory days. they seem so much glorious in retrospect.
i have hugged a few porcelain gods in my day.
that wave of puke is a tad bit disgusting to think on.

i wonder, did you drink to forget the war, or was it just freedoms kiss
that pulled you along - the brotherhood. The brotherhood got me
in a bit of trouble along the way, but you made me chuckle
at the image of you riding him, and at my own memories
made along the way.

Ah the good old days! I'm really surprised there weren't any fights along the way. Seems like every time I got that wasted someone started slugging somebody. I love that ending haiku. Your full name lol

Thanks for the grammar catch, Brian. The imagery, as rough and tattered and profane as it is, stands naked as truth told, and memory served. I still have the capacity to stun a few of the faint-hearted in the group. My health has worsened, and I no longer do open mic appearances or appear in plays, but you inspired me, and I fully enjoyed and inhabited my last hurrahs. Bjorn's video meeting was a huge success; hope to see more of it.

Oh wow...you took us on quite a ride there. Vivid imagery... I think I do not want to ride the bus again any time soon with my feet down... heh

Love, love the vibrancy of this one, Glenn!💝

I love the background story of your photo Glenn. What a night and riot of fun despite the puking and smell of vomit.

I enjoyed this way too much. Smiles. So hilarious.

Oh ... the joy of being young and foolish. I did my military service under peace condition, but I do remember a party night in a ski resort after a night in a snow cave that share some similarities... no such pictures as this,

Another priceless anecdote, Glenn, which, despite the mention of puke (one thing that makes my stomach churn) made me smile. I never imagined that’s what sailors get up to! What on earth is a ‘donkey show’?

One photo I'm wondering if you wished later had never been taken!

Kim, and perhaps others. In Mexico in the 60's they would put on a show with a donkey and prostitute, in which the donkey would mount the woman sexually. Probably just an urban legend, prevalent even today.

There is something fantastic about this, how memory both tames and heightens the moment, so that we can revel in it without the worry of consequence. Great story! Thanks for sharing

You have lived such an interesting life Glenn! I love this tale of youth and puke and sex-lol.

WELL!!!! The details are amazing here....I am with you in this scene. The photo....don't even know what to say. Hilarious in some ways. Depressing in others to see what war does to people. Somehow, we try to escape it even when we are in it.
A bawdy tale during a serious time in your life I think.