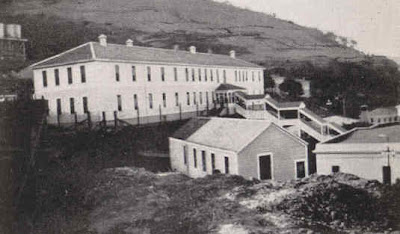 
from Yunte Huang, The Poetics of Error

Written on the walls of the wooden barracks of the detaining station on Angel Island off the coast of San Francisco, Angel Island poems delineate historical trajectories that are in many ways unaccountable in canonical discourses. They belie the pitfalls of teleological History by virtue of their modes of inscription. … I want to look at these poems as examples of tibishi (poetry on the wall), a traditional Chinese form of travel writing that provides an outlet for the large social sector which is denied the right to write history. Seen by its cultural function, tibishi in the case of Angel Island poetry becomes indistinguishable from graffiti, a scriptural practice that is sometimes condemned as vandalism and at other times commissioned as artwork. Not understanding the scriptural economy of these poems has led to a reductive hermeneutics in the hitherto efforts of transcribing, translating, and interpreting them. This kind of hermeneutics may sit well with an economic system that favors productive abstraction and with a political system that recognizes only fully-fledged citizen-subjects, but it lies at odds with what I call the poetics of error. Characterized by misspellings, misattributions, and mistranslations, the poetics of error in these poems has significant linguistic, historical, and cross-cultural implications. Read differently … misspellings spell out linguistic nonconformity and the fictionality of standard orthography, misattributions can be attributed to folk revisions of authorized history and intentional conflations of cultural origins, and mistranslations translate code-switching and heteroglossia. Understood this way, the poetics of error echoes the liminality as well as subversity of the anonymous poets' status in a world delineated by expansionist or nationalist historiography.

[A sampling of poems follows.]

1.
Over a hundred poems are on the walls.
Looking at them, they are all pining
at the delayed progress.

.
2.
There are tens of thousands of poems
composed on these walls.
They are all cries of complaint
and sadness.

.
3.
Let this be an expression of
the torment which fills my belly.
Leave this as a memento
to encourage fellow souls.

.
4.
My fellow villagers seeing this
should take heed and remember,
I write my wild words
to let those after me know.

.
5.
The sea-scape resembles lichen
twisting and turning for a thousand li.
There is no shore to land
and it is difficult to walk.
With a gentle breeze I arrived
at the city thinking all would be so.
At ease, how was one to know
he was to live in a wooden building?

.
6.
The insects chirp outside the four walls.
The inmates often sigh.
Thinking of affairs back home,
Unconscious tears wet my lapel.

.
7.
In January I started to leave for Mexico.
Passage reservations delayed me
until mid-autumn.
I had wholeheartedly counted on
a quick landing at the city,
But the year's almost ending
and I am still here in this building.

.
8.
A building does not have to be tall;
if it has windows, it will be bright.
Island is not far, Angel Island.
Alas, this wooden building disrupts
my travelling schedule.
Paint on the four walls are green,
And green is the grass which surrounds.
It is noisy because
of the many country folk,
And there are watchmen
guarding during the night.
To exert influence, one can use
a square-holed elder brother.
There are children who disturb the ears,
But there are no incoherent sounds
that cause fatigue.
I gaze to the south at the hospital,
And look to the west at the army camp.
This author says,
"What happiness is there in this?"

.
9.
Being idle in the wooden building,
I opened a window.
The morning breeze and bright moon
lingered together.
I reminisce the native village far away,
cut off by clouds and mountains.
On the little island the wailing
of cold, wild geese can be faintly heard.
The hero who has lost his way
can talk meaninglessly of the sword.
The poet at the end of the road
can only ascend a tower.
One should know that when
the country is weak,
the people's spirit dies.
Why else do we come to this place
to be imprisoned?

.
10.
Leaving behind my writing brush
and removing my sword, I came to America.
Who was to know two streams of tears
would flow upon arriving here?
If there comes a day when I will have
attained my ambition and become successful,
I will certainly behead the barbarians
and spare not a single blade of grass.

[Poems relate to the anthology Island: Poetry and History of Chinese Immigrants on Angel Island 1910-1940, edited & translated by Him Mark Lai, Genny Lim, & Judy Yung, University of Washington Press, 1980, 1991. The full version of Yunte Huang’s essay can be found at http://ubu.com/ethno/discourses/huang.pdf & more in his book, Transpacific Imaginations (Harvard University Press, 2008) .]

Posted over on Jerome Rothenberg's blog Poems & Poetics
Posted by Glenn Buttkus at 6:13 AM

I've never been to jail but I suppose it could happen in the blink of an eye -- framed or falsely accused. Life changes. One day you're a mom volunteering at school, sitting with your kid for piano practice, baking chicken pot pies at night and the next you're writing poems on a prison wall.

It can be all so fleeting, Glenn. So fleeting indeed.

Remind me never to be framed, okay? Or in the wrong place at the wrong time to be accused of something big.