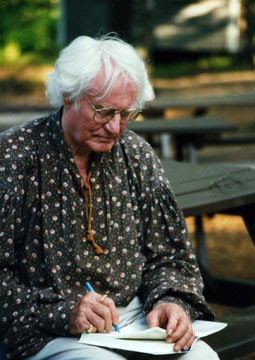 ROBERT BLY: "How amazed I am after working hard in the afternoon that when I sit down at the table with my elbows touching the elbows of my children. So much love flows out and around in circles.

ROBERT BLY: More of the fathers are dying each day. It's time for the sons and the daughters. Bits of darkness are gathering around them. And the bits of darkness appear as flakes of light.

ROBERT BLY: A GATHERING OF MEN: It is a massive masculine shadow, 50 males sitting together in halls or crowded room lifting something indistinct up into the resonating night.

ROBERT BLY: My ego is stubborn often drunk, impolite, my loving finely sensitive, impatient, confused. Please take messages from one to the other.

ROBERT BLY: Walt Whitman does everything. And whenever you have a person in another culture like India who is trying to make us understand what religious life is like in India, they quote Whitman.

When he begins calling out his beautiful list of people that he loves and things that he loves, the divine always comes into it in some way. So you just feel he is pretending to write about human beings. Maybe he's some sort of messenger from god.

ROBERT BLY: "I lived my life enjoying orbits. Which move out over the things of the world. I have wandered into space for hours, passing through dark fires. And I have gone to the deserts of the hottest places, to the landscape of zeroes. And I can't tell if this joy is from the body or the soul or a third place."

Well, that's very good you find that because when you say, "What is the divine," it's much simpler to say there is the body, then there's the soul and then there's a third place.

ROBERT BLY: So plunge into the truth, find out who the teacher is, believe in the great sound. Kabir says this, when the guest is being searched for - see they don't use the word "God". Capital G, "Guest". When the Guest is being searched for, it's the intensity of the longing for the Guest that does all the work. Then he says, "Look at me and you'll see a slave of that intensity." So he's the first one that I ever went into who wrote true religious ones.

ROBERT BLY: Poetry will not stop a war. No, it's never been able to do anything of that sort. It merely speaks to the soul, so the soul can remember -- so it's quite proper to have all the poems against the war. And it's proper not to be disappointed if nothing changes. Would you like me to read the poem I have against — this is probably the first poem written against the Iraq War in August of 2002.

ROBERT BLY: Yes. Isn't that amazing that it's happening again that the people in Washington are not suffering at all, but the ones who are suffering are those young men who had a bad education and needed to escape somehow from the tramp of American life, and so they go there and get their legs and arms blown off?

ROBERT BLY: You'd bring the poets into the heart, instead of having them in your head in graduate school. And that's what you do with children. You bring children in, and they get associated with the heart when they're very small, and then they can feel it all through their lives.

ROBERT BLY: "More and more I've learned to respect the power of the phrase, the greedy soul. We all understand what is hinted after that phrase. It's the purpose of the United Nations is to check the greedy soul in nations. It's the purpose of police to check the greedy soul in people. We know our soul has enormous abilities in worship, in intuition, coming to us from a very ancient past. But the greedy part of the soul, what the Muslims call the "nafs," also receives its energy from a very ancient past. The "nafs" is the covetous, desirous, shameless energy that steals food from neighboring tribes, wants what it wants and is willing to destroy to anyone who receives more good things than itself. In the writer, it wants praise."

I wrote these three lines. "I love very close to my greedy soul. When I see a book published 2000 years ago, I check to see if my name is mentioned." This is really true. I've really done that. Yes, I've said that. So, in writers, the "nafs" often enter in the issue of how much-- do people love me? How much people are reading my books? Do people write about me? Do you understand that? It probably affects you too in that way.

ROBERT BLY: Yup. "Think in ways you've never thought before. If a phone rings, think of it as carrying a message that's larger than anything you've ever heard, vaster than 100 lines of Yeats. Think that someone may bring a bear to your door. May be wounded or deranged. And think that a moose has risen out of the lake and he is carrying on his antlers a child of your own whom you've never seen. When someone knocks on the door, think that he's about to give you something large, tell you you're forgiven, or that it's not necessary to work all the time, or that it's been decided that if you lie down, no one will die."

ROBERT BLY: I'll do one more here. Stealing sugar from the castle, this has the word joy. We are poor students who stay after school to study joy. We are like those birds in the Indian mountains. I'm a widow whose child is her only joy. The only thing I hold in my ant-like head is the builder's plan on the castle of sugar. Just to steal one grain of sugar is a joy.

ROBERT BLY: That's right. And that wonderful energy that you can see in a human face even when walking down the street. In New York you see this incredible energy that's inside there and is being blocked all the time by family and business and all of that. But it's still there--circling around God, around the ancient tower. And I have been circling for a thousand years. And I still don't know if I am a falcon, which means someone who goes in and grabs things and steals them, or a storm. Storms circle too. Or a great song. Well, we both hope that we're great songs.


Posted over on Bill Moyer's Journal
Posted by Glenn Buttkus at 7:50 AM