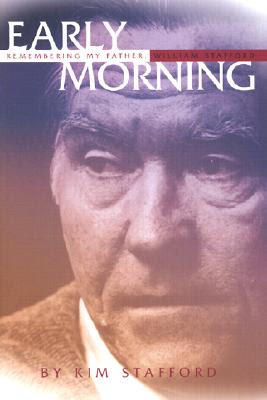 William Stafford was born in Hutchinson, Kansas, in 1914. He received a B.A. and an M.A. from the University of Kansas at Lawrence and, in 1954, a Ph.D. from the University of Iowa. During the Second World War, Stafford was a conscientious objector and worked in the civilian public service camps-an experience he recorded in the prose memoir Down My Heart (1947). He married Dorothy Hope Frantz in 1944; they had four children.

In 1948 Stafford moved to Oregon to teach at Lewis and Clark College. Though he traveled and read his work widely, he taught at Lewis and Clark until his retirement in 1980. His first major collection of poems, Traveling Through the Dark, was published when Stafford was forty-eight. It won the National Book Award in 1963. He went on to publish more than sixty-five volumes of poetry and prose. Among his many honors and awards were a Shelley Memorial Award, a Guggenheim Fellowship, and a Western States Lifetime Achievement Award in Poetry. In 1970, he was the Consultant in Poetry to the Library of Congress (a position currently known as the Poet Laureate).

Stafford's poems are often deceptively simple. Like Robert Frost's, however, they reveal a distinctive and complex vision upon closer examination. James Dickey, writing in his book Babel to Byzantium, notes that Stafford's "natural mode of speech is a gentle, mystical, half-mocking and highly personal daydreaming about the western United States." Among his best-known books are The Rescued Year (1966), Stories That Could Be True: New and Collected Poems (1977), Writing the Australian Crawl: Views on the Writer's Vocation (1978), and An Oregon Message (1987). William Stafford died at his home in Lake Oswego, Oregon, on August 28, 1993.

One of the most striking features of his career is that he began publishing his poetry only later in life. His first major collection of poetry Traveling Through the Dark was published when he was forty-eight years old. It won the National Book Award the following year in 1963. The title poem is one of Stafford's most well known works. It describes an experience of encountering a recently killed doe on a mountain road. Before pushing the doe off into the canyon, the poet discovers that the doe was pregnant and the fawn inside the doe is still alive.

Stafford had a quiet daily ritual of writing and his writing focuses on the ordinary. The gentle quotidian style of his poetry has been compared to Robert Frost. His poems are typically short, focusing on the earthy, accessible details appropriate to a specific locality. In a 1971 interview, Stafford said:

"I keep following this sort of hidden river of my life, you know, whatever the topic or impulse which comes, I follow it along trustingly. And I don't have any sense of its coming to a kind of crescendo, or of its petering out either. It is just going steadily along."

Stafford was a close friend and collaborator with poet Robert Bly. Despite his late start, he was a frequent contributor to magazines and anthologies and eventually published fifty-seven volumes of poetry. James Dickey called Stafford one of those poets "who pour out rivers of ink, all on good poems." He kept a daily journal for 50 years, and composed nearly 22,000 poems, of which roughly 3,000 were published.

In 1970, he was named Consultant in Poetry to the Library of Congress, a position that is now known as Poet Laureate. In 1975, he was named Poet Laureate of Oregon. In 1980, he retired from Lewis and Clark College but continued to travel extensively and give public readings of his poetry. In 1992, he won the Western States Book Award for lifetime achievement in poetry.

Stafford died of a heart attack in Lake Oswego, Oregon on August 28, 1993, having written a poem that morning containing the line "You don't have to be good," my mother said;"just be ready for what God sends." In 2008, the Stafford family gave William Stafford's papers, including the 20,000 pages of his daily writing, to the Special Collections Department at Lewis and Clark College.