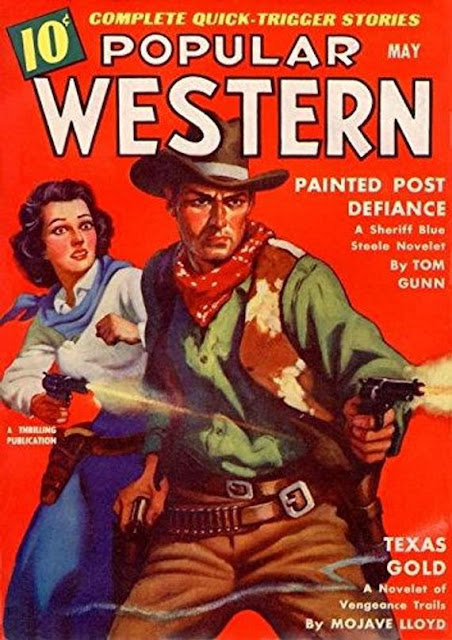 “Building trust can be difficult. Turf wars, politics
and lack of solid alignment are the primary
obstacles to peace and prosperity.”
--Wyatt Earp.

1(sound cue) Piano and coronet.
2(overhead drone wide shot) The black carriage
traveling through low hills, ducking under some tall
trees, moving at a leisurely pace.
3(from above, the drone drops down toward the
carriage, then cut to a tracking travel shot)
4(cut to a two-shot) Buck and Salina.
Salina: The ranch is starting to look lived in.
Buck: Thanks, but it’ll be Fall before the place looks
worth a damn. I’m figuring on hiring another hand,
and Johnny and me need to catch some more wild
horses. I’ll need to find another good stud, then I’ll
be living in tall cotton. We may have to ride up to
Silver City to find the right stallion.
Salina: Both you and Johnny have stallions.
Buck: Red and Bob? Sure, they’re good animals,
but I want a stud with hellfire in its loins. You know,
a horse like that fine Appaloosa that Paul Bronson
rides from the Triple B to the China Doll every day.
5(two shot) over Buck’s shoulder.
Salina: Would you mind if I came out here once in
a while and pitched in?
6(close-up) Buck: Pitch in?
7(sound cue) Banjo and accordion.
8(medium close-up) Salina: Yes, I’ll wear britches,
and get to hammering or painting or fence mending,
and be a general nuisance, if you let me.
9(two-shot) Buck: Girl, you know you don’t have to
ask. They looked at each other, then both laughed.
Salina: Thor limped around for a week after the fight.
How are you feeling?
Buck: I’m a bit stiff too; turns out old Thor was a lot
handier with his dukes than I had counted on.
Salina: Dad wants you to know that he, Mr. Hart, the
blacksmith, Doc Sweeney, and a couple others plan
on being there tomorrow when you have your
appointment with Bronson.
Buck: I’m much obliged.
10(cut to a prairie dog standing in his hole)
11(sound cue) the rumble of Salina’s carriage
approaching. The prairie dog drops out of sight
in his hole just as the ebony carriage, pulled by
palominos, comes around a corner, and passes
in front of the camera.
12(two-shot) Salina: I respect what you’re trying
to do. A man’s life can be worth less than a horse
in this town.I’m curious though--I don’t  think that
you’re running scared, so why are you being so
easy-going with a son of a bitch like Bronson?
13(sound cue) snare drum and guitar chord over
Buck’s loud chuckle. He was still getting used to
her plain-spokenness.
Buck: Maybe I’ve lived long enough that I’ve
started to grow up. Maybe I’m more sure of
myself than some men. I could go all bullets
and knuckles on Bronson, but hey, let’s try
some diplomatic forays first.
13(two-shot) Salina: How do you figure
Bronson sees all this?
Buck: I aim to find out tomorrow.

Posted over at dVerse Poets Pub-OLN
Posted by Glenn Buttkus at 2:25 PM

It looks like Buck and Salina are getting along fine. I like Buck's observation: "Maybe I’ve lived long enough that I’ve
started to grow up. "

I wonder if diplomacy works on the Bronson's... maybe they don't think it's needed, but I guess sometimes it's the best thing to have them make the best move. Sounds at least like he's starting to get a lot of people on his side.

I can’t believe this is episode 95 of Blackthorne, Glenn, and that you have included a quote from Wyatt Earp – that name takes me back. I like the way you’ve opened with a traditional Western genre view of a carriage in the hills. I guessed it might be Buck and Salina, and enjoyed the two-handed scene, getting to know them better. I chuckled at the line ‘I want a stud with hellfire in its loins’ and smiled at Salina’s comment that she’d wear britches to do some DIY.

Glenn, once again...your work is always stellar in the Blackthorne series.

Every character within your work is cinema western at its best.

Maybe I've lived long enough to grow up....I wonder if cowboys really do grow up. The real ones seem to work hard but, mostly they seem to be little boys.

hmmmmm . . . so when you started writing this, did we have drones? Were they popular? Good use of the drone here, while saying what it is looking at. I do enjoy Buck...always have. I wonder how he'll really react if Salina shows up in her "work clothes" to be a farmhand????
PS: have you read the books of Zane Gray?

"Girl, you know you don’t have to
ask. They looked at each other, then both laughed."

I can see this and it delights me.

I doubt Bronson will be reasonable, but Buck has to try diplomacy first. It's good to see he has a "strong alignment" with several well-respected members of the community. Together they may be able to turn the tide against Bronson...

This was incredibly riveting!❤️ I love the exchange between Salina and Buck particularly where he says; "Girl, you know you don’t have to ask." Their chemistry seems to be blooming with each episode, I can't wait to read what happens with Bronson!

Lillian--the drone shots are the latest video technology; filmmakers are using them a lot. They replace the much more expensive helicopter shots of the past. Remember, my cinemagenic poetry allows you to see the movie I am creating in your mind. If you were to go back into my archives, you'd find helicopter overhead shots.

Amazingly, I think this is the first episode I've seen. Whatever happened to Westerns? They were standard Saturday afternoon fare when I was a kid.

I'll tell you something shocking now. We made the kids watch The Magnificent Seven, the real one, with Yul Brynner, and when Harry rides off, my son said "I bet he's going to do a Han Solo".

Which is right, but completely wrong, too. It's quite obviously the other way round. Han Solo was doing a Harry.

Also, I was amazed at how little back story there was. I had detailed stories for all those guys, and they just WEREN'T IN THE MOVIE. I'd made them up. But I'd seen enough Westerns to know what the stories should be.

Sorry, went off on one there.

I also like the line about living long enough to grow up. This seems like such a natural scene--as in the dialogue flows between them. It's easy to imagine them.

The Wyatt Earp quote reminded me of his character in Maria Doria Russell's novels "Doc" and "Epitaph." Have you read them?

The prairie dog scene is such a perfect little pause. Of course I love it all. Reading your work is like an out of body experience.

I love how you pull us right into the story. The visuals are amazing and I feel like I am watching the drama play out in front of my eyes. You know I enjoy these segments.

You are a talented storyteller. Gripping and engaging, and I love it.

I love the integrity of the plot Glenn. Each episode you share is nicely wreighted, and satisfyingly whole. How the hell do you keep the thread of the story line intact and unknotted? Do you go back and redread what you’ve written each yime you post a segment, or has this been a consistent ongoing daily write, and you are sharing segments as you are so moved to? Is it already completed? Inquiring minds want to know... :-) You gotta get this produced into a movie someday. It would be cool to see another Western on the screen Maybe Netflix?

Your poem with all its sound effects reminds me so much of the Lone Ranger and Dragnet that I used to listen to as a boy on Saturday afternoons.

Great to see the saga continue, you paint a vivid picture. I love a fine Appaloosa and stirring up trouble when required :). It comes alive in the imagination.

I have so much catching up to do! Brilliant as ever, Glenn! :)

Rob, as a writer, you are hip to the shape and structure of each episode. Kudos. My plot source is an unpublished Western I wrote in 1967. I am less than half way through the manuscript. You are bang on that I do some rewriting, especially dialogue, and I try to pick segments that a) fit the two page parameter, and b)have some plot closure, like the beats in a section of music.