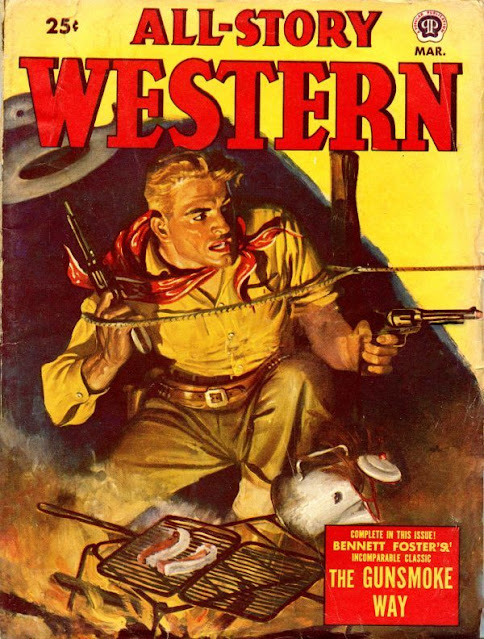 “Regret is a form of punishment itself.”

around to face them, his index finger pointed like a

pistol between Buck’s eyes. First Thor, and now him!

the bad ones. They are more honest with a woman.

Hop: Christ Almighty. You are the only decent woman

in this whole goddamn town, the only skirt worth

looking at and pursuing. And you sift through the

gutter to find a man.

Salina: No one prevented you from looking

elsewhere. That was your choice.

She reached into her bag and found a new swab.

stove. Returning to Buck’s side, she touched his

chin. Buck was busily watching Hop, his eyes were

smoldering. She reached around the side of his face

and dabbed at the bullet crease at his temple.

5(one-shot) Hop slammed his hat on the desk.

Hell--I’m sorry, really sorry. I’m such an asshole. I

must be drunk. I promised myself I would never

say shit to you about my feelings.

you felt. She scrapped some dried blood out of

Buck’s eyebrow with her fingernail.

Hop awkwardly stared at the floor.

Salina: I could be your friend if you like.

Hop put his hat back on, and cleared his throat.

Things will work out.

lot of blood under the bridge tonight.

Salina opened Buck’s shirt and began to clean his

Hop: I think it’s time for you to get back to your cell.

Buck: They will be back.

Hop: You pay that no never mind. They won’t get

past me. Beside, whoever sent those bastards is

running short of men. We saw to that real proper.

more. So I think things will stay quiet for the rest

Salina replaced the top on a bottle of iodine.

Finished, she began to pack up the bag.

Both men silently watched her.

Hop, speaking first: You look like you could use

a good dose of shuteye.

Salina hugged Buck. As he held her, he could feel

her breasts pushing against him, boring through

his cotton shirt. She patted the pistol in the back

of his pants, while stirring the pistol in front. She

Hop: If Henry stops back, we’ll let him know that

Salina kissed Buck with her eyes, and closed the

door behind her. Hop stared at the steel plate in the

center of the door, then without looking up, pointed

to the rear cell. Buck walked back into the shadows

of the cell block.

know, that skinny cousin of Mateo’s, is going to be

one busy bean-eater. Eighteen men in one night.

I haven’t seen carnage like this since I was in

Buck (as Voice-Over) Got into a few scraps with

the natives, did you?

9(close up) Buck: I Still think you ought to give me a

gun to even up the odds a bit.

Hop: (as Voice-Over) You know how I feel about that.

Posted by Glenn Buttkus at 4:03 PM

This is getting to be more and more exciting with each installment, Glenn! There is quite a love triangle here with Hop confessing his feelings to Salina in a drunken state. I thought she took it quite well and needless to say has eyes only for Buck! Especially resonate with; "Can’t help myself. I like the bad ones. They are more honest with a woman." It really is true!!💝💝

Hop may get stirred up, but he still sees things in black and white.

(I enjoyed your topical poem in the LIVE session.)

:::heavy exhalation of relief::: I'm glad Hop came to his senses despite his drunken lapse of being honest with his feelings. I wish Salina would stay as she could keep things cool between Buck and Hop as well as make those scumbags outside less likely to shoot the place up. I like the pistols line.

You know because of these breaks between OLN it feels like they've been cooped up in there for a very long time. I pray help comes soon!

I also really enjoyed the poem you read today. So refreshingly honest and an open expression of sincere relief that we made it through 4 years of sheer HELL.

It is going to be a long night for Buck, I think... I look forward to the next instalment!

Excellent, impassioned reading yesterday, I enjoyed it very much.

Apologies for reading late, but after the live OLN, I was too tired to read, and we had the electrician in all yesterday to sort out the heating – there is still none in the study or dining room! Your Blackthorne instalment provided some much-needed heat! Buck is such a stalwart, Glenn, and I like his response to Hop and Selina’s conversation: ‘There’s been a lot of blood under the bridge tonight.’

Blood under the bridge, a love triangle, and a stirred pistol. 😏. A lot of things going on there!

Follow my social networks for funny memes and odd news