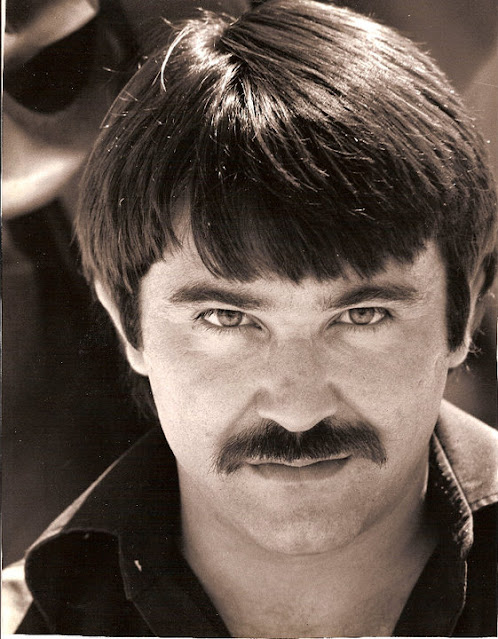 “The best things happen at the exit ramp of your

My family went to the movies a lot in the 50’s. Like

so many before me, I was totally mesmerized by the

magic of the movies, the golden gilded star-kissed

access to that world. A decade later I attended a

elated to do my internship at two Northwest Regional

Theaters. I was overjoyed to earn my Actor’s Equity

card, followed soon by membership in the American

Federation of Radio & Television Artists, and the

of fire, passion, and ambition, classically trained and

hungry for the challenges to come.

Ten years after, I awoke one gray morning, finding

myself as a disillusioned, depressed artist going

inhabiting my dreams, watching them twist and sour

and atrophy. Sometimes when one carves an artistic

vocation out of a once joyful avocation, reality

becomes a cruel succubus, strangling the smile, and

had snow on its paws the day

I ran out the door.

Posted by Glenn Buttkus at 1:01 PM

I can really feel this... maybe acting and artist ambitions are roads that are too hard to travel, and sometimes I feel that success can be even worse than "failure" when you see how the movie stars end up.

Well Glenn.....I wish you could be sitting beside me because once again, I let out an audible sigh at the ending of your haibun. Everytime you write, I learn something more about you. The idea that and avocation/interest in the arts can be strangled by pursuing it as a career is profound. Don't know if you used the word strangled (once I'm in the comment I can't get back to your post) but it's similar. I think of my son who was a gifted pianist and won many competitions - not just local ones - and how he did not want to go to "just" a conservatory because he wanted the academics in college as well as music. He was straight A, many scholarships including a full academic ride to U of Maryland...and after one semester of piano with a prestigious teacher there, and his academics....he came home and told us music was too precious to him....too much of a love and he didn't want to pursue it for a career. He has a successful career and still has his love of music. I suspect if he'd gone after the music only, he would not have been happy. Oh my how your writing brings it all back to me.
I LOVE the haiku at the end....it's perfect! Just an amazing write, Glenn. You never cease to amaze me. Personally, I think you are an extremely talented individual!!!

I hope you found joy after that disillusionment. Younger daughter and her husband met in the theater, but both decided they wanted more stable careers.

It's always seemed to me we live our life in chapters, and sometimes the chapter change has been painful. You are an amazingly talented man, Glenn, and I suspect you have found outlets for your talents. May 2021 bring you all things good!

There are so many layers to this wonderful poet I know as Glenn. I do think that sometimes, the act of doing sucks the very passion from you. You are so multi-faceted- BRAVO!

The theatre cat seems to be saying the future will be better.

I love the photo you chose to head your haibun. So handsome and those eyes filled with hunger.

You followed your dream and what a dream! How many can say that with honesty? I admire you for it.

I know what you mean about turning a love into a job in a smaller sense. I love to garden and at one point took a Master Gardeners class and got certified. It was when I started doing the compulsory volunteering with the local garden club that I started to feel the joy of gardening being extracted by that atmosphere.

Cats are known to be messengers from the other world, and there is no doubt the cat with snow on its paws was one for you.

A real twister, Glenn. And the cat closer is perfection. Salute

This is solemn and what a ride this took us on! Not many get to follow their dreams and you did what many could not do or pursue in their early life; the arts are hard indeed, especially acting. I cannot even begin to imagine. But even then, I can see the disillusion all the same, the transition from the ecstasy and passion to bitter reality, disillusionment, and realism. I can resonate with that, it's almost as if the dream was no longer a dream and it instead turned to the concepts that make its reality, the truth of it all, how it was no longer what it seemed. This is what I think you are describing and I am also reminded of the common saying--to never work your dream job; it will no longer be enjoyable once experienced as no longer a hobby but rather as an occupation. I'm also getting that sense from this piece.

This is beautifully entwined and I love the haiku especially. What is it with everyone's amazing haikus? They are stunning closers. :)

The leap from avocation to vocation can be dicey. Whenever I hear, "You could make good money selling your artwork," I too run out the door. Glad you had the wherewithal to change course.

I hope this means you are living without regret. Some never try to live their dreams. I love the ending of this. It is perfect.

I love your honest recounting of a dream gone sour. At least you had the nerve to chase it, and to go out there and live it! I can imagine it's a hard life, but there must be something very rewarding in it too. A bit like poetry. Great to see a photo of you in your acting days as well!

I love the reference to Eliot’s Gus the theatre cat in your haiku, Glenn – I’ve always loved Old Possum’s Book of Practical Cats, although most people only know him from the musical. I love the way you describe the movies as a ‘golden gilded star-kissed amalgamation of photography, painting, theater, literature, classical music, and historical epics’ – well summed up. You already know how much I enjoy reading about your past and career, and I know the cruel succubus of reality.

Cheers and Happy New Year!! As a community theatre volunteer (props, running crew, wardrobe, etc) I have a fantasy of auditioning, getting cast, an acting gig! My anxiety tripped me up. NOW our theatre is offering audition classes, acting classes ONLINE. Nothing to lose at this point??

Well penned, Glenn. At least you took the time and effort to reach for your dream. Sadly, there are times when reality can take the life out of a dream.

I don't think we are ever "going nowhere". We just don't always know where we're going. Your supreme writing skills are a gift to the dVerse community....and anyone else in the universe whose had the pleasure of reading your work. Thanks for the honest, heartfelt write.

This really left me speechless, as an aspriring artist at a crossroads of sorts, the idea that avocation in the arts can be strangled by pursuing it as a career, shook me. Now I am questioning my choices again, Very moving write, Glenn.