This is not the American Flag 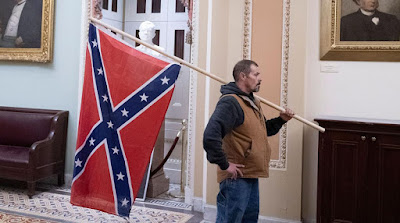 This is not the American Flag

“I cannot trust a man to control others who

It certainly is not Old Glory.

It is not sung about in the Star Spangled Banner.

Nor is it the Founding Father’s Flag, made by

Miss Betsy, with 13 stars in a circle.

line all by itself.

It is not even the 25 star flag, with a huge star

It is not the flag with concentric circles of stars,

with a big one in the middle.

Nor is it the “X” of stars, with extras on the edge.

I would stand and pledge allegiance to every

It is not our national treasured ensign.

Nor is it the battleship flag I picked up while in

No, it is a traitor’s battle rag,

a treasonous flag of slavery

Thank the angels of reason, it is finally

recognized as a pariah, and can no longer be

becoming something horrendous, waving too often

backed by thousands of rabid Trumpers as they

defecated and urinated in the sacred halls of Congress

Posted by Glenn Buttkus at 2:31 PM

I am a no-guns peace-monger, and I believe in just protesting — but with these terrorist thugs, I am beginning to wonder if we shouldn’t just take ‘em down, and let the instigators bleed out. They are mounting armed warfare against our country. We can get medical help then, and imprisonment for the mindless followers who, were just going along for the rush of it. I am shocked to realize that I might just meant this,

An epic write that needs to be read by every citizen in the USA.

You can't say it any plainer, Glenn. They are treasonous and must be effectively dealt with, whatever is the most effective with the least amount of force. We've got their faces plastered all over on video footage. Local governments really need to be on their guard right now to nip this sh*t in the bud. I learned that 2 of my county's commissioners loaded up buses and were there -- proudly-- for the attempted coup. These two need to be removed from their positions immediately.

You have summed it up so well! This is not just a flag... it is hate personified and a desecration of the Capital Halls. ! Very well written Glen.

I will never get over that image.

An interesting history of American flags you've included here with this important message. I hope you don't see any more trouble on inauguration day.

Desecration of our democracy, and there should be no place for it in public discourse. You always have a way of summarizing the crux of the matter that is powerful and true.

Thank you for the history of the American flag, Glenn, which I know very little about. There are so many names and variations. I can see how the flag has been desecrated by fascists and hope that the whole sorry situation comes to an end very soon.

A traitor's battle rag. Precisely. I hope the days to come are without incident.

I don't understand how anyone can still hold that flag as a symbol. I guess there will always be haters.

When I read your title I said, "Amen" out loud. It was SO SO difficult to witness the horrific, mindless, degrading, disgusting acts of violence that happened on Jan.6. I can't even imagine how it hurts the hearts of good Americans because it hurt mine. For four years and more, I've been constantly questioning the logic and mental capacity not of idiots like these(that's a waste of time) but of those who are otherwise intelligent and upstanding people that follow this sheepish shit! Glenn, this piece is stellar and deserves to be read way beyond the poetry community.

It's certainly a traitor's battle rag, and seeing it inside the Capitol shows exactly how much respect they had for USA... Sickening, it should be banned in the same manner that swastikas are .