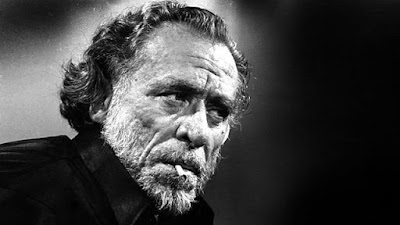 He asked, “What makes a man a writer?”

“Well,” I said,”It’s simple. You either get it down

on paper or jump off a bridge.”

Some of them were excellent,

and some of them made poor ass-wipe;

still, he wrote them,

and we need to read them,

all of them, because each one,

each roughshod line of them

drags you into the outrageous world view

of the wrecked alcoholic hulk sexist

barfighter nihilist poet that Buk was.

Oddly, reading him does help me to have more faith

in my own scribbling, my poetic drooling, my true

voice--even though I have barely published jack-

shit, so what--I am heard, I am read, and goddamn

it I see myself clearly, an old actor with good hair

and a well-trained elocution (Buk sucked at those

events where he read his own work). I mean that’s

me out there at Poetry Slams and open mic events,

all me raging against ignorance and malaise, finding

an audience at festivals, on street corners, in men’s

rooms while holding towels for jack-off artists and

fags, on the steps of the Capitol in Olympia, in that

little park adjacent and down the street from the

on the back of a wagon wearing the black cowboy

hat I wore in 1977 while making a Western with

Kurt Russell, at Pow Wows, at picnics, during

break-ins, after muggings, at the stage door of

theaters while plays are being performed, in

women’s restrooms to the beat of tinkling behind

sweaty cooks in hair nets are bustling over greasy

smoky fryers, in the back seat of police cars while

sitting next to drug dealers and whores, adjacent

to the hipsters leaning against brick walls who are

houses in the corner over by the Asian imported

sonnets sotto voce, in hardware stores next to the

nuts and bolts, at fish canneries, when I can find

Reservation in the shithole of Taholah, with the

busy buskers in that tiny park north of the Public

Market in Seattle, and while reciting Bukowski in a

raspy voice to match his own, salivating as I work

my tongue over his rough words.

Talking about Charles Bukowski, whom I doubt I

would have liked, even though I respect his poetry.

I probably would have gotten into a fist fight with him

in an alley behind some bar. We shared strong arms,

a bad temper and a poor complexion. I do actually

Digesting his rancor, reading him is part of our

poetic rite of passage. You know, when he was

sober, and not too fixated on pussy, the ponies,

wine, beer, or his cock, he did write some about

the injustices he witnessed. Of course, that was

between bar bitches, when he could hold his food

down, when he felt good enough to bathe or shave.

For me, his words get under my skin, and rattle

around in the empty rooms within, only to rise up

don’t ever get the idea I am a poet; you can see me

at the racetrack any day half drunk

but let me tell you, there are some women there

who go where the money goes, and sometimes when you

look at these whores these onehundreddollar whores

you wonder sometimes if nature isn’t playing a joke

dealing out so much breast and ass and the way

you look and you can’t believe it; there are ordinary women

and then there is something else that wants to make you

tear up paintings and break albums of Beethoven

across the back of the john; anyhow, the season

was dragging and the big boys were getting busted,

all the non-pros, the producers, the cameraman,

the pushers of Mary, the fur salesman, the owners

themselves, and Saint Louie was running this day:

a sidewheeler that broke when he got in close;

he ran with his head down and was mean and ugly

the driver broke him wide

took him out by the fence where he’d be alone

even if he had to travel four times as far,

and that’s the way he went it

all the way by the outer fence

traveling two miles in one

and he won like he was mad as hell

and he wasn’t even tired,

and the biggest blonde of all

all ass and breast, hardly anything else

went to the payoff window with me.

that night I couldn’t destroy her

although the springs shot sparks

and they pounded on the walls.

later she sat there in her slip

and she threw back her beautiful head and laughed.

and all thanks to an ugly horse

who wrote this poem.

Posted by Glenn Buttkus at 1:52 PM

Your intensity always amazes me, as does your brilliance and talent....and your blunt crudity sometimes causes my goody-two-shoes sphincter to snap, but you're a real keeper, Glenn Butkus!

You have to talk back when you read him, which is a quality you share. A good one!

I love this, Glenn. You take that gritty stream-of-consciousness style and throw it right back at him. I haven't read any Bukowski for years, but I remember dipping in to him in my late teens and being swept away by that life. I think, like you, I probably wouldn't like the guy much in reality. Your poem gives a sense of him, and of you - just as "real", but definitely different. I hope you enjoyed the prompt, I certainly enjoyed reading this.

Thank you for this rip-roaring introduction to Bukowski, and your poem which I much preferred. I don't think I would've liked him either and if I'd met him I probably would've smashed a Beethoven record over his chauvinistic head! But like you say, he gets under your skin...

Although his poetry is interesting, he was the kind of man I avoid, a man of his time, too. I agree that we need to read his words, as you say:
‘each roughshod line of them
drags you into the outrageous world view
of the wrecked alcoholic hulk sexist
barfighter nihilist poet that Buk was’.
And you’re right, reading him does give us faith in our own poetry. I’m glad you included anecdotal lines about yourself– I love reading about your experiences – as well as about Bukowski. The final lines sum up your thoughts about him well.

I have to agree with Kim. This is the sort of man, I've known, and I go miles out of my way to avoid. Once burnt, forever scarred is what I remind myself.

You are on fire my brother! This was an excellent, ass-kicking piece, and a really fucking engaging read Glenn — well written. What a strong wild character — and Bukowski was sumpin’ sumpin’ too. Happy & Healthy New Year to you my friend, and to yours. Here’s to writing more punch-to-the-gut poetry in 2021. Rage on!

This is gorgeously rendered, Glenn! Especially love; "there are ordinary women and then there is something else that wants to make you tear up paintings and break albums of Beethoven across the back of the john."

Wow, I never got around reading Buk, his poems are very controversial I've heard and after reading the one you've shared I see why haha.. I liked your part of the "conversation" even better than Buk's!

Just getting to this one, Glenn. It was worth the wait. I love the Buk poem you shared. A man in love with life and a poet. A helluva combination. You and him would have had a knock-down drag-out and then would have been best buddies for life. As maybe you are in a poetic sense. Such fun and profound uttering by both of you seasoned gentlemen.