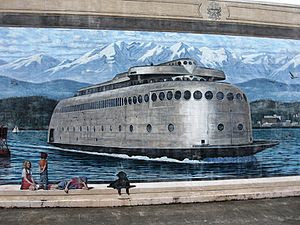 “I don’t know what it is, but there is just something

extraordinary about the Kalakala.”--Steve Russell.

There once was an Art Deco ferry boat called the

Kalakala. It was launched in 1935 as a ray of hope

during the Depression. It was like a Buck Rogers

for 25 years, like a king-sized turkey roaster with a

double row of perfect round portholes marching along

each side, one on the car deck, and one for the

out over the bow, capturing a hammerhead profile,

with two tall bow doors opening to a slender bow,

She was decommissioned in 1960. A Californian

bought it to make a restaurant and casino out of

it. It sailed down the coast on its own steam. That

dream failed, and it was bought, and towed to Kodiak

Island in Alaska where it became a rusty scrap heap.

A guy in Seattle bought it, and docked it on the

south end of Lake Union, where it continued to

deteriorate. In 2012 it was sold for one dollar to

Waterway. After a year, it begin to list starboard,

sadly sinking. She became a hazard to other ships,

so they pumped her bilges and righted her.That’s

when I met her.

She was at an industrial dock, not open to the

public. I got permission to photograph it. She was

docked near an empty office trailer. There was a

soon to be restored. The sign was rotting, and was

There she was, the Silver Lady. She was aware of

me as she preened and posed. Her bow doors were

sprung open, an invite for gulls and crows. There were

from the dock. Her beautiful Native American name

was covered up with plywood, her stainless steel

railings were twisted and bent up along her upper deck,

the flying bridge was pummeled with broken porthole

glass, her car deck was greasy and splintered, her

stylish benches and tables were lop-sided, she was

pock-marked everywhere with rust holes and

up on shaky timbers one more time, but too arthritic to

take a bow during her final applause.

I captured images until I began to lose the light,

then just stood there for a while watching her patina

edges soften. I felt like I had experienced an

Posted by Glenn Buttkus at 1:46 PM

She sounds like a real beauty, Glenn. I bet she loved feeling pretty again in the eye of your camera. We have a couple of big water vessels here that have been through their trials and tribulations as well (The SS Milwaukee Clipper, The LST 393, and the USS Silversides.)

Great tribute to a most unusual vessel ... something like that could be a great floating gallery! Glad you saw her at both ends of her life

A fascinating read, Glenn. You made the grand lady become very proud and real to those of us reading your story. Sad to discover she's been dismantled, and bits and pieces of her sold and scattered all over the world. What stories she could tell.

This is a wonderful story Glenn. How interesting to see all of these in your words.

This was a sad but fascinating story of your 'Silver Lady' Glenn! I'm not sure how you managed to fit such history and emotion into the space of your poem, but you certainly did!

I’d never heard of an Art Deco ferry boat called the Kalakala – and I love Art Deco – so this had me intrigued, Glenn. I love that she was launched ‘as a ray of hope during the Depression’ and enjoyed your description of her, especially as ‘a majestic proud polished Dali vessel’. I was pleased that she was made into a restaurant, but sad that she became a rusty scrap heap. But one man’s scrap heap is another man’s work of art and, thankfully, your photographer’s eye picked her out, ‘pock-marked everywhere with rust holes and barnacle blemishes’ and ‘too arthritic to take a bow during her final applause’, to make her beautiful again.

The fate of so many dreams...and yet the scraps still wait for the right soul to restore them.

This is such a stunning tribute poem to an Art Deco ferry boat, Glenn!💝 There must be so many tales hidden within her "The Silver Lady," as you mention here. A lot of history and emotional depth in your words. Kudos!😍

Well, I thought you were inventing this, and half expected Buck to show up, but I googled it and damn. The things you learn from reading poetry.

She is an amazing beauty... so sad that all her plans for retirement came to nothing...