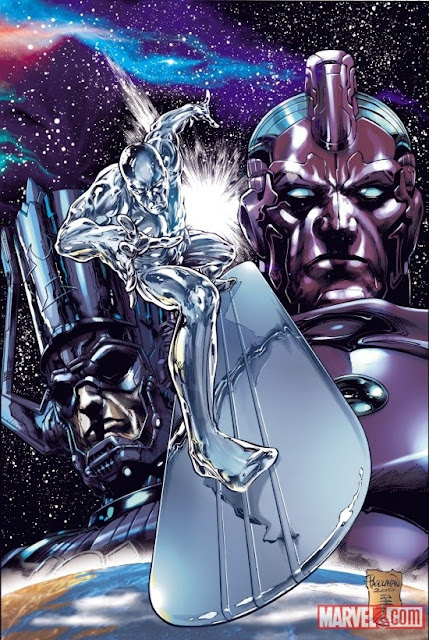 “To my great surprise, Twitter is not housed in a silver pod
that orbits the earth; no, it is in a bland building in San
Francisco, next to a bowling alley.”--Susan Orlean

Silver is more than the Lone Ranger’s stallion,
more than mere coinage coatings, even
more than an alloy with gold, copper, zinc
and lead; much more, for Marvel Comics
has been drawn to its luster like a pack
of wild dogs chasing a wolf bitch in heat.

From the Golden Age, through the Silver Age
of comics, the Marvel universe has been laced
with Silver, crowned with it, and many
of their super heroes have been forged
and fused with it, an amazing amalgam,
with characters coated & placed heavy into it
like beautiful & clunky Navaho jewelry.

My absolute favorite shining superhero,
drawn by Neal Adams, is the Silver Surfer,
of course; once just an eager young
astronomer, Norrin Radd, living on  Zenn-La,
who saved his homeworld from Galactus,
a planet devourer, by agreeing to become
his herald, to zoom through the cosmic
dust on his silver surfboard searching for
planets to consume--

until he came upon the Earth,
met up with the Fantastic Four,
who helped him regain his humanity,
saving Terra Firma, betraying Galactus,
and being exiled on Earth for punishment.

Silver Sable was a female mutant mercenary,
an acquaintance of Dr. Doom, who hunted
war criminals so relentlessly that she often
angered other superheroes, like Spider-Man
and Captain America.

Silver Dagger was a former Cardinal in the Catholic
Church, who hunted demons with his magical
dagger, often went astray, and has fought
Spider-Man and Dr. Strange.

Silver Scorpion, Elizabeth Barstow, was a Golden Age
character who was a companion to the Human Torch.

Silver Samurai, who just fought the Wolverine in his
latest film, is a Japanese mutant, who energizes
his sword & armor, who became a criminal,
and has fought Daredevil, Black Widow, and Spider-Man.

Silverclaw is a female mutant who is a reserve member
of the Avengers, named Maria, and has the power
to shape shift into several different were-forms.

Silvermane has always been a super villain,
and is a long time nemesis of Spider-Man,
and he has fought Daredevil, and Nick Fury.

Silver Scarab is a superhero named Hector Hall,
who is the son of Hawkman & Hawkgirl,
who became for a time the Sandman,
and then later Dr. Fate.

Quicksilver is a mutant, the son of Magneto,
the twin brother to the Scarlet Witch, possessing
superhuman speed, and was recruited by
Iron Man to be a member of the New Avengers.

I don’t know why the other Comics behemoth,
DC, never got as attached to silver superheroes,
but there probably is a good reason, like maybe
Jack Kirby would have punched them out,
or Stan Lee would have sued them.

Posted over on Poetry Jam

Would you like to hear the author read this poem to you?
Posted by Glenn Buttkus at 5:58 PM

Lots of silver here! So many sparkling supers.

huh i never really thought about that...DC doesnt really have any silver...other than one of the Metal Men....i knew most of the marvel ones...did not know silver scorpion or silver dagger....

Excuse me while I go slip into my silver evening gown, silver stiletto four inch heels, silver and diamond jewelry ... now there, I feel better. :-)

rEnjoyed your romp through the 'silver' of super heroes. I wonder if any of them were born with a silver spoon in their mouth! Smiles.

Thank you for laying some Silver on me--that ending was the best!

I never knew of so many silver heroes.

Wow, i think this was a work of a superhero.