Holiday Tale in Black and White 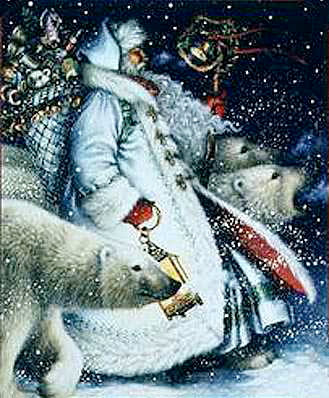 “Christmas may be a day of feasting, or of prayer,
but always it will be a day of remembrance--a day
in which we recall everything we have ever loved.”
---Augusta E. Rundell

Christmas Eve came,
and my youngest daughters arrived
to cook for me, celebrate, play cards, and to phone
their mother who was visiting our oldest daughter
in Baltimore, playing with our two infant grandsons.

My sweet girls stayed until I was exhausted,
hoping to make me forget for a moment
that I was home alone.

Christmas dawned cold, wet, and gray;
just perfect, no in climate weather
to impede my journey to join some friends
for a scrumptious holiday breakfast;

our thoughts twinkling as we discussed the spirit
of the day, and I was the first to notice that something
was changing outside the windows, my God--

it was snowing, fat pointy flakes of spiked white,
first a few squads, then battalions, before
whole armies blanked out the sky;

as I drove home off of their hillsides, hoping
the roads would remain clear; but soon,
too soon, the snow became rain,
and those overweight snain-drops slapped
my windshield and the pavement like you
would slap a bad dog with a newspaper.

Later, while at home watching
IT’S A WONDERFUL LIFE for the hundredth
time, other friends called with a gracious
invitation for me to join their family gathering
for Christmas dinner, but I politely declined

the offer, not wanting to be cast as the pitiful
old fool brought in to be fed & fussed over,
dropped down hard amongst a swarm of strangers.

Of course later I did feel hunger’s prick,
and nothing in the larder seemed significant
enough to fit the image of festive fare, so

out I went with my car, roaming the wetness,
passing all those other homes lit brightly,
filled with family, and all those restaurants

that were darkened premises, festooned
with handmade signs all announcing
“Closed for Christmas”.

Driving in aimless circles, my lonesome crusade
garnered gold surrounding the bold neon letters
that spelled Denny’s; pulling in happily I marveled
at how full the parking lot was.

They wished me holiday greetings as they seated
me in a large booth alone, & presented me with
a special menu with only ten holiday choices.

I heard myself order #7; meat loaf, home fries,
and apple sauce, and while sipping my strong coffee
I looked about the place, and suddenly, without warning
I was overwhelmed with sadness, I mean what kind
of loser had to come to Denny’s for Christmas dinner?

But as my eyes roamed the room I saw complete families,
truck drivers, pods of seniors, some street people,
and three older ladies laughing heartedly; some

in work clothes, some in church clothes, focused
on each other, with no one staring back at me;
an invisible man munching meat loaf.

Driving home with my window down, enjoying
the cold air, I recalled that morning’s headlines
in the Tacoma News Tribune:

23 dead from a car bomb in Baghdad,
15 dead from a suicide bomber in Afghanistan,
the armed forces of the United States had received
30,000 turkeys and a flat ton of cranberry sauce,
and the city of Tacoma had counted 800 homeless
souls jamming up the missions & flophouses last night.

Damn, just another day in the life, no better,
no worse than hundreds of others that had occurred
in 2007, so I decided that what we needed to do

was take a serious shot at World Peace, treat
our planet better, watch our waistlines, and maybe
elect a woman or a black man as President,
so that Christmas 2008 could really shine.

Posted over on dVerse Poets MTB
Celebrating the dVerse Poets 2nd anniversary we will use past MTB prompts
to write from; I chose December 2011, Victoria C. Slotto asking us to write about Emotion.

Would you like to hear the author read this poem to you?
Posted by Glenn Buttkus at 10:42 AM

ha smiles...so it's 30 C outside and you're writing christmas eve...smiles...hmmm on the food part...i'm getting hungry and great work on the atmosphere as well...and on the emotions of course, bringing in the soldiers and what's going on in the world... and hey..you have a black man as president now...smiles

Ha, I agree with Claudia. It is hotter than Hades outside. It's funny how on Christmas one is much more aware of one's loneliness....for some reason....when loneliness CAN exist 365 days a year for some people. But I do know the feeling; and it IS always nice to be surrounded by others at the holiday. If not family, then at least the crowd in Denny's. Smiles. You really gave a vivid portrayal of the holiday experience for you that year.

nice...ha...um, i am in the park at the sprayground keeping wet to keep from frying and you are in snow...that feels good man...a sad tale a bit on being alone and feeling like the invisible man, i like though in the end your heart for others....so much we could do...some probably since but still so far to go...

Wow, Glenn, you got the emotion part down, for sure...definitely without over effusiveness. This was a smooth-flowing narrative poem. I enjoyed the sense of place and, well, the cool weather on this 100 degree plus day in Reno.

Today's song is Tracy Chapman's Why? with it's incredible lines; Why, when there's so many of us
are there people still alone?

Being alone is bad enough at the best of times, at Christmas it must be a thousand times worse. You've really captured that here.

What a story and loneliness with a perspective you present. Loved your experience at Denny's.. really there are a lot of people alone.. Imagine a scene were people started to pull tables together and actually talk. I have travelled late Christmas eve by subway sometimes (visiting family) and it's amazing how many lonely parents visiting their children you see. This is great inspiration to read.. and your conclusion I love,

Great work here--I once spent a Thanksgiving on the road--ate at a KFC. Yeah, fried chicken instead of turkey. Nicely done, juxtaposing loneliness and sadness with a touch of hope.

I loved that story. I love the "soul" of it. It's so real, so touching, so personal and yet universal..so, clearly poetic. An important poem to write and more so to read. It arcs over the horrors of war, the waste of drugs, the sadness of loss and celebrates the joyousness of life. Thank you!

This is great!! Holiday's are always slightly off from all other days of the year!! Wonderful job!! :-)

Love the story Glenn ~ The sadness of the man is palpable from going around the neighborhood to eating dinner by Denny's ~ Christmas for me is only memorable with the family, if not its another day ~ Wishing you happy weekend ~

Wonderful! (Slightly unseasonal, but none the worse for that)

This is really moving and well done.

So many different things happening at once everywhere - you've captured that here, sharpened in the lens of a holiday. k. (This is Manicddaily.wordpress--my mobile device likes to stick to an old blogger ID). k.