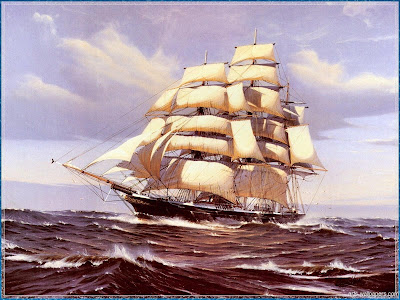 “Words, of course, are the most powerful drug
used by mankind.”--Rudyard Kipling
from THE SEVEN SEAS.

Our blue planet, in its infancy, was completely
covered by water, one vast pole to pole
body of water, one seemingly endless Salton Sea;
rife with terrible storms as armies of waves
clashed within the magnetic axis lines, pulled
about spastically by the new moon.

Within all this turbulent saline, life began;
first a few random cells splitting, then combining,
until countless aquatic colonies were created
clinging to reefs, deep trenches, and the
slippery sides of sea mounts.

Some of these primitive creatures developed
curiosity, and they visited the surface incessantly,
until the Forces-That-Be co-created some of them
sporting gills and nostrils, and lo, sea mammals
began to appear, preferring gulping open air to
breathing oxygen underwater.

Rising hourly out of the water with their huge bodies,
they kept searching the flat horizons for specks
of substance, because they felt daily the shaking
of the earth’s core, knowing that the magma heart
kept thrusting its cooling peaks & pinnacles higher
each eon, until one magnificent day
Land appeared, first as atolls, then islands,
then huge continents.

The bravest of the open air-breathers began
flopping themselves up onto the land, remaining
longer each time before returning to the waves;
until Nature, or the gods, kept intervening, turning
fins into legs, then arms, soon adding prehensile
grips, before the clumsy little hands were created
complete with opposable thumbs.

These creatures were eager to explore the lands
provided for them by the throbbing planet; some
of them beginning to stand erect, first on four feet,
then all the way back & up on two, standing tall;
allowing their natural instincts to become
dreams, intellect, & dialectics--but always,
always amongst the diverse populations
there were men who longed to return to the sea
as sailors, fishermen, & explorers.

Early on a saying was used to connote splendid
nautical skills, mariners would say that they
“sailed the seven seas.”

One of the earliest records of this saying was Sumerian
in 2300 BC, and they listed them as
the Persian Gulf
the Gulf of Khambhat
Bay of Bengal
Strait of Malacca
Singapore Strait
the Gulf of Thailand
the South China Sea.

Later in Medieval Europe, they changed the list;
the Black Sea
the Caspian Sea
the Arabian Sea
the Indian Ocean
the Red Sea
the Mediterranean Sea
the Adriatic Sea--
and depending on the region, the list could include
the Aegean Sea
the North Sea
the Dead Sea--
aka the Sea of Sodom
the Sea of Galilee.

In Colonial times, sailing in Clipper ships
from England to China, “sailing to, and returning
from, the other side of the world”, the list was
the Banda Sea
the Celebes Sea,
the Flores Sea,
the Java Sea,
the South China Sea,
the Sula Sea
the Timor Sea.

Today we call over a hundred bodies of water “seas”,
so as you dream of piracy, glory, & exploration,
just pick seven of them, any seven,
and sail the hell out of them.

Would you like to hear the author read this watery poem to you?
Posted by Glenn Buttkus at 11:28 AM

ha. pick any 7 and sail the hell out of them...most def...interesting how our world has grown and shrank, all depending on perspective, as we have gone on...what a journey too from the dawn of time to today...think i would have liked to live in the age of discovery in the time of exploration....

haha... i would love to sail them all...that would be wonderful

Well not only do you have a take on part of the evolutionary process but you know your seas and oceans welkl. Is that a historical hobby of yours?>KB

KB, I was a history minor in college, but as a poet I just adore doing research for a challenge, weaving real facts in with the metaphysics.

Well, I would sure like to do that, at least in theory, only I get terribly seasick in practice. Very cool poem to cover all this territory, Glenn. (This is Karin - http;//Manicddaily.wordpress.com)

I really like your historical approach, Glenn. Your poem enriches me.

So many sees to sea in one lifetime lovely words in deed. Love ya Friend

This is almost an epic, I'd say, Glenn, and a study of history, anthropology, evolution and, of course, poetic expression.You know how to see and write the big picture.

A lot of romance in those lists, a lot of the sense of how much of our planet and our history is tied up with the water within and without.

story of beginning of life told in such an amusing way.. and the latter portion of the seven seas was very enjoyable to read.
Interesting as well as appealing... liked it.

To sail the Seven Seas,to encompass and emulate the sea-faring exploits. The stories of romance of old. Brilliant Glenn! You covered lots of grounds!

This flowed and had me captivated to the end although I paused at "magma heart" and thought what a wonderful phrase. Earth's history and evolution. Wondrous writing.

First time reader Glenn, I read and I also listened - your voice has as much character as the words you penned. I enjoyed both- thank you.