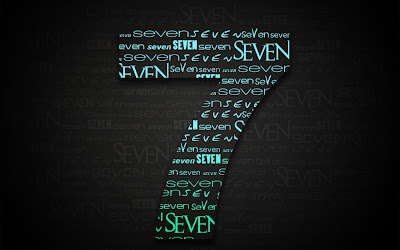 “We shall never understand one another until we
reduce the language to just seven words.”
--Kahil Gibran

We have always looked to the number 7 for luck,
odd not even, and we have continuously
been immersed in septenary myth & reality
since Day One, for it took God 7 days
to create the world, didn’t it--and we spend
all lot of our time trying to avoid a relationship
with the 7 Deadly Sins.

Shakespeare’s seventh play was Edward III,
“All the world’s a stage
and all men and women are but players;
they have their exits and entrances;
and one man, in his time, plays many parts;
his acts being seven ages.”
--As You Like It.

In ancient times there were Seven Wonders of the World:
the Colossus of Rhodes & Great Pyramid at Giza,
the Hanging Gardens of Babylon,
the Lighthouse of Alexandria,
the Statue of Zeus in Olympia,
the Temple of Artemus at Ephesus,
the Mausoleum at Halicarnassus.

7 is the fourth prime number,
actually a double Mersenne prime.
A 7-sided shape is called a hepagon.
There are 7 fundamental types of catastrophes.
7 was considered a God number in ancient Egypt,
and the Pharaohs ordered things in groups of seven.
It was Seven Against Thebes.

There are 7 books in the Harry Potter series.
Harry was born in July, the seventh month.
Wizarding students spent 7 years at Hogwarts.
Lord Voldemort created 7 Horcruxes.
I read each volume in 7 days.
T.E. Lawrence wrote the 7 Pillars of Wisdom.
George Carlin created The 7 Words You Can Never Say.

The original 45 rpm records were 7 inches in diameter.
Pirates sailed the Seven Seas.
There are seven main Archangels.
President Taft coined the phrase “seventh inning stretch”.
Mickey Mantle wore number 7 on his uniform.
Buddha walked 7 steps at his birth.
Atlantis, according to myth, was made up of 7 islands.

There are seven main stars in the Big Dipper.
Most mammals have seven cervical vertebrae.
In British folklore, the Queen of the Fairies,
( Quentin Crisp perhaps), paid a tithe to Hell.
Isaac Newton identified 7 colors in the rainbow.
Diamonds are Forever is the 7th film in the James Bond series.
Daniel Craig is the seventh actor to portray Bond.

In the past Hindus wrote a 7 in one stroke, as a curve.
Ghubar Arabs made the longer lower line a diagonal.
Europeans added a third line in the middle
to differentiate it from the #1 in handwriting.
Canada has eleven highways and route 7’s.
Many countries, many in the Middle East, have only one.
America has fifty-three of them.

It should take a reader between 7 seconds
and 7 minutes to read this poem, and
about 7 days to forget it. I’m 7 times
grateful that 7 of you managed it.

Posted over at dVerse Poets "Poetics"

Would you like to hear the author read this lucky poem to you?

Ha, that took indeed more than 7 seconds to read, but then we have to remember that in China (which is slightly larger) 8 is luckier than 7.

you know i am totally going to laugh if you get seven comments...wow...tour def force #7....again interesting all the connections...probably the most common lucky number as well...in under 7 minutes...but far more fascinated than 7 seconds...

This was very interesting reading. I don't think it took me seven minutes to read, but probably I spent 7 minutes because I decided to read it twice. I wish I had been the seventh commenter though, as that would have made me lucky!

Wow... that is really interested. you played really well with the numbers. I loved it. :-)

edit:- Wow... that is really interesting. you played well with the numbers. I loved it. :-)It was an enjoyable read.

I love that quote from Shakespeare, Glenn.

A clever potent write... thought provoking. Makes me think of that movie, hmmm was it?

Wow...that is a lot of sevens going on my friend. Great write!

haha...7 surely is an important number