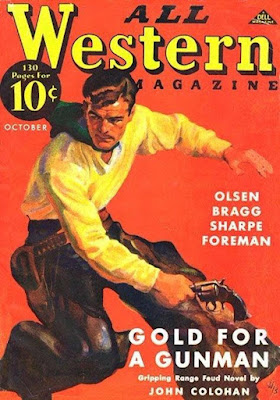 “ Don’t give up your dreams--cling to your vision
with all the tenacity you can muster.”
--Orison Swett Marden.

1(sound cue) cello and harmonica.
2(two shot) Buck rose up and tramped off through
the long shadows of twilight toward the bunkhouse.
3(close-up) Johnny’s eyes reflected the flames still
in front of him.
4(dolly back to a one-shot) His arms were folded
around his belly like a bat folds up its wings. His
shoulders slumped, his head was down.
5(expand to a two-shot)
6(sound cue) footsteps, creaking leather, and tin
against tin--Buck returned, whistling a tune, loaded
down with a saddle, a lantern and a burlap sack.
Buck: Hell, we got everything we need.
He opened the sack and pulled out a blanket, a pile
of rags, disinfectant, and a half bottle of whiskey.
Buck: You know, I never did like that barn much--
didn’t spend much time in the house either. If I
was to ever take a woman, it might be strange to
try and make a home in that house.
Johnny: Hey, I hear you, but that’s bullshit.
Buck: No shit about it, Pard, carefully peeling
back the shirt around the wound in the Indian’s
shoulder. That house was full of death and
sadness, and that barn was full of rats.
7(cut to close-ups) Johnny: What will you do?
Buck: Rebuild.
Johnny: I meant tomorrow.
Buck: I will keep my appointment with Bronson.
8(sound cue) piano.
Johnny: You will kill him?
9(two-shot) Buck poured some disinfectant onto a
clean cloth and dabbed it into the shotgun wound.
Johnny did not flinch.
Buck, after a moment: Maybe.
10(close ups) Johnny: I will not die.
Buck: A mean sonofabitch like you? Christ, no,
not today. He gently grasped the Eagle’s wrists.
Let’s take a look at your belly.
11(two shot) Johnny allowed his hands to be
lifted. Buck bit his cheek as he peered at the bullet
gash in the plexus, but his eyes remained calm.
Johnny: Is it bad?
12(sound cue) violins and branch flute.
Buck: Amigo, it is not good--but the bleeding has
stopped. Let me bandage it.
Johnny nodded. Buck tore several strips of cloth
from an old cotton shirt. Johnny held his arms up.
His shoulders quivered. Buck began to wrap the
strips around him, but an eagle’s talon that hung
around his neck got in the way.
Johnny: Take it.
Buck carefully removed it, and held it.
With it could go your luck .
Johnny: Crazy talk, boss. I will be stove up for a
month, no more. You wear it while I heal up. It will
be good medicine for both of us.
Buck nodded, and put the talon, suspended on its
leather lanyard, around his thick neck.
Hold your arms up again.
Johnny did. Buck wrapped the thick strips around
Johnny’s waist, and tied them tightly. He wrapped
the old warrior in a red horse blanket, and tipped
his head back gently onto a saddle that was
propped up behind him. He eased him back like
he would with a sick child. He held the bottle of
whiskey for him, tipping it up, letting Johnny gulp
down three scalding swallows.
Johnny: I tell you this killing is the only thing that
Bronson understands.
Buck: I will see him tomorrow. If these were his men,
I will tear his heart out and eat it in the middle of
the street.
Johnny: Jesus, boss, you know these men were sent
by Bronson!
Buck: We killed every one of them, so I can’t ask.
Johnny coughed, then rasped: I piss in the milk of
his mother.
Buck: I shit in the milk of his grandmother.
Johnny: He must not win.
Buck: I fear there will be no winners in this.

Posted over at dVerse Poets Pub OLN
Posted by Glenn Buttkus at 1:46 PM

There are no winners in war, but there are always those who loose a little bit less... good to see that Johnny will be OK...

Wow this is an awesome episode. I can imagine the conversation - tough and gritty. War though has deadly consequences - no winners.

This is so intense! I have a feeling they will emerge as legend!❤️

His arms were folded
around his belly like a bat folds up its wings.

I love this description. I can see it when I look in the mirror!! LOL

I really hope Johnny lives, and it does sound hopeful that he will. I hope Buck has some backup going into that meeting with Bronson...

The atmosphere you created in this episode is close and full of darkness, evoked especially through the long shadows of twilight and flames, and Buck’s words: ‘That house was full of death and sadness, and that barn was full of rats.’ I can’t wait to find out what happens when Buck keeps his appointment with Bronson. I love the tenderness, companionship and loyalty between Buck and Johnny, Glenn, shown in:
‘He wrapped
the old warrior in a red horse blanket, and tipped
his head back gently onto a saddle that was
propped up behind him. He eased him back like
he would with a sick child. He held the bottle of
whiskey for him, tipping it up, letting Johnny gulp
down three scalding swallows.’
I hope Johnny survives.

You are a wonderfully talented man Glenn — a splendid writer. I am going back into the hospitsl Tuesday for another bank of CT scans to detremine the extent of my lung disease. Diabetes, coronary disease, arteriosclerosis, progressive heart failure kept beating by a pacemaker, and now a lung disease restricting my oxygen capacity. It may well have stacked up too high against me bros. The thing I will miss most beyond my family — is writing, and the community of writers, lyricists, and scoring musicians putting music to my words... all these amazing people I have met and lost in the 57 years since I wrote my first lyric and performed in front of my first band: “Little Ceasar and the Romans”! But it all boils down to words... the magic of words. I will miss the words most of all. Wish I had met you earlier in life, when we were healthy men — and creative sons a bitches!? Think we could have been friends.

I like the ending about the grandmother's milk and the thought of there being no winners.