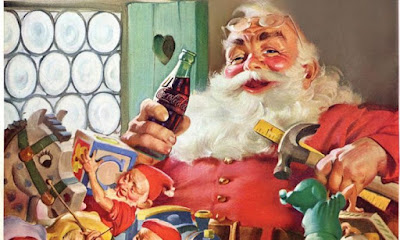 Jesus wept as he said, “Whoever shall humble himself

Those logs of Yule,

are upon us; many of the

children are hushed, awed, and frightened

by the raw pain found in the faces

of Christ on those multi-cultural crucifixes,

grimacing in silver, ivory, and gold.

Confusion reigns as myths and scripture

as every year concludes under an aluminum,

and wooden ornaments, on a designated day

then catapulted into the sands of Judea--

to shepherds in rags with their sheep,

to a sky full of angels humming hosannas

and bending the light, to wise men mantled

in it while extending their gifts at the feet

of a strangely silent babe sitting up

in its roughly-hewn wooden cradle, while

his mother shivered in the straw, cold and weak

in the shimmering pinlight with the strangers.

and magical reindeer from Lapland,

freshly castrated by the teeth of unblushing

and pull a great silver sled across the skies

of the world, everywhere on the planet,

stretched tight over his girth

and the red drenched in blood,

the red of revolutions, of grievous wounds

of flapping flags, of opium poppies,

and of the Christ to come,

of priests, ministers, and evangelists;

and infidels during a myriad of Christmas Crusades,

not that long after it had been raked into the parched

earth of Roman arenas before and after

his thirty-three birthdays, where men enslaved

were prodded with hot irons to do battle

with other men and with beasts, and those other

crucified ones could see from their own crosses

to plumed braying burros who dragged

the corpses of the cowardly and the fallen

out the Porta Libitina, no bellicus

on their blackened bleeding lips,

no dirges or prayers, as the corpulent crowds

The frozen Popsicle in the festive stocking cap

standing next to that red tub ringing a tiny bell

outside Safeway said, “A little child shall lead them

in purity and humility.” But I still wonder

if the child won’t lose its way subsisting

on fairy tales, lies, and madness.

My goodness this is majestic! I especially love; "spindle-legged camels carrying kings
to a sky full of angels humming hosannas and bending the light."💝💝

I think you've summed up absolutely everything I dislike about Christmas. Thank God that's all over for another year!

I like the alternative name for the season, Crimsontide, Glenn, which reminds me of the berries that decorate our hedgerows. What a contrast in the first stanza between the ‘logs of Yule, cohorts of candy canes, and devastated’ and ‘the raw pain found in the faces of Christ on those multi-cultural crucifixes’. The phrase ‘grimacing in silver, ivory, and gold’ is so well done. If we weren’t so used to it, we would find the whole thing confusing. Us older folk have seen it develop into a commercial monstrosity, so different from the simple celebrations of our childhoods. I love the oxymoronic Santa Claus cracking a cruel whip! No wonder my daughter burst into tears the first time she was taken to Santa’s grotto!

This, Glenn, I think is one of the best of your poems that I've read. You spared nothing with this one, a sleigh ride of a poem over broken beer bottles and the result of mass over-eating. Loved it.

The imagery in your writing is beat poetry at its finest.

Back when I was a kid and my kids were young it was a happy time of excitement, but as the years have passed its sordid reality is apparent. It is quite a mish-mash of imagery and symbolism isn't it. The whiteness (try to find a Christmas stamp without white of santa and gear, snowman, etc!) and the redness of sacrifice, shame, guilt, etc. I like the way you describe the death of santa's suit. I think are craving tradition but we are ready for new, healthier stories attached to them.

Glenn, holy shit brother, you just pushed all the buttons. This is an epic, and full of such energy and righteous contempt. I must admit, after yesterday, I have been running from my depression and anger. Ironically, I found great release in this — a catharsis. I wrote a pure escape piece today. I have filled this day with music, and am diving back into it — but this was a scorchingly powerful way to momentarily come up for air. Thank you dude.

All our rituals have been turned into Hallmark Holidays and excuses for waging war. Greed oozing from every wound, open and closed. As usual, you hit the mark.

Follow my social networks for funny memes and odd news