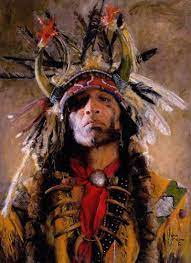 your ego attachment; then you can slip in and out

of animal and deity forms.”--Zeena Schreck.

2(medium one shot) Buck put down the big breech

loader and stood up calmly to face Tatanka--the

down on the hunter, as Buck stood his ground.

4( cut to behind Buck) as the bull charged.

Suddenly the great albino came to a halt, twenty

a dust cloud settling around it.

and settled to the ground, folding its thick legs

beneath it. Buck did the same, resting his fists on

his leather-clad knees. The bison switched its tail at

a squadron of horse flies, as it held Buck’s weary

blue eyes with its harsh red ones. An arrowhead still

embedded in its left shoulder, had a red feather

attached to it, and it flapped gently in the breeze.

7(sound cue) a cacophonous blast of a dozen

the herd surrounded by hunters all firing at once.

Heavy bodies crashed to the ground. The Sea of

Hair flowed with blood and bleats.

10(sound cue) an eagle’s scree over a saxophone

11(medium close up) Buck looked up as the eagle’s

shadow crossed his face. When he looked back at

the bison, he saw a Shaman, a Lakota medicine

wearing a white buffalo head dress. His face was

painted white, with a red swath across his eyes.

He wore a bison vest, his bare arms painted

white with red lighting painted on both of them

Buck nodded, and the nod was returned, their

12(sound cue) the staccato of many horses.

13(two-shot) Buck and the Albino rose together.

They could hear the horses laboring along the

switchbacks below the ranch, about halfway up.

The great Bull, returned to itself, pawed at the

ground, backed up, glanced once to the north

and the approaching horses, once at Buck, and

charged off to the east, moving at a swift gallop

for a beast of its size, running toward the purple

Buck waited until the flashing white hooves were

14(tracking shot) Buck picked up the Sharps and

ran across the yard in huge strides, spinning up

soft clods of dirt, heading toward the flat bluff above

the burned barn, where El Blanco had materialized.

As he reached the top, he stood for a moment to

catch his breath. He could see his family plot a

in with its short picket fence, all white-wash in the

sun. Wait a minute--there’s someone standing over

there, an Indian. He blinked and the person was

gone. Christ, could it be Johnny?

Buck jumped into a thicket of tall scrub oak, and he

drive. The ground he knelt on was damp with dew.

black powder, burlap, and his own sweat. He parted

the brush in front of him, and peered out.

16(wide shot) He could see them all clearly now.

There were four riders and one wagon, pulled by

into the yard, while the others watched and waited.

The wrangler sat a horse well. He rode past the

eight bodies and the maple tree, and pulled up in

front of the bunkhouse. He was an older man, gray

stubble covering his face. He wore a long-barreled

Colt. He swung his left leg over the saddle horn,

and built himself a smoke. It was Bronson’s

Posted by Glenn Buttkus at 2:29 PM

Glenn, you build your world so well in my mind with every sense firing. I'm glad Buck isn't ready to go, and it sounds like he might have someone in his sights very soon. Where is his girlfriend!?!? She should know where Buck was headed.

This is incredibly potent! I love the atmosphere you have created here Glenn, magnified by your voice at the Live event. I can hear the coronet and castanets as the bison switches its tail and meets Buck’s wearyblue eyes with its harsh red ones. A thrilling moment! I was surprised at the end by Ryker's arrival! Me thinks there is more awaiting Buck as the cyan shadows deepen. 💝💝

So vivid...Buck is at home in both worlds it seems. But he has more to tell us.

You put me right in Buck's head, especially at the end with all the descriptive smells. Enjoyed hearing you read today, you are a natural storyteller! 💕

I love the supernatural element here, and the little details which really bring the scene to life:

black powder, burlap, and his own sweat.'

Whenever I read one of your Blackthorne episodes I have a vivid film running through my head, Glenn, complete with soundtrack. There is not only action in this one, with Buck facing up to the buffalo, but also the wonderful spiritual coming together of man and beast. What picture you painted of the great albino coming to a halt with a dust cloud settling around it (hoar ox is a great name for it) but how sad that such a magnificent creature was shot with an arrow – I was so glad it survived. The brief memory of the slaughter of a whole herd was horrendous. I love the nods between Buck and the Shaman, and the appeal to the senses of the section:
‘The ground he knelt on was damp with dew. He could smell huckleberries, wild chives, ferns, black powder, burlap, and his own sweat.’

I really enjoyed your live share bother, thank you for sharing that! This continuation of your story points to the human failure of believing we hold dominion over things of this earth. No human herd awareness of balance or constraint. I just finished a comment over on Brendan’s site in which I shared my opinion more deeply. Anyway, love your continuing saga.

You created a very vivid scene. I especially enjoyed the power of the animals, and all the sensory elements.