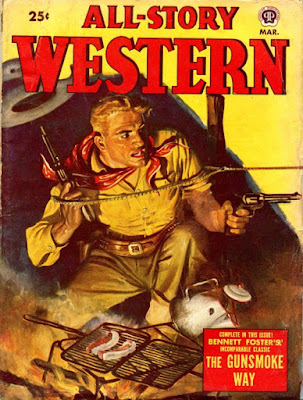 “Be leery of silence. You may not be the winner. Often

2(one-shot) Ryker lit his cigarette, took a couple of

puffs, and raised his fist as a signal.

rider on a black horse led the others down.

5(medium close-up) the rider in the lead was

6(sound cue) snare drum and harmonica over the

7(stationary shot) as Thor, the wagon, and two drag

8(cut to medium wide shot) as Thor and the others

reined up behind Ryker.

9(close up) Buck lying down in the tall grass, his

Sharps at his side.

10(sound cue) voices at a distance over harmonica.

Buck could not hear what they were saying, but he

could hear them talking. The lanky hand that was

huge even at a hundred yards, with tufts of silver

over their fetlocks, around the stately maple and

pulled them up parallel to the line of stiff death,

the bodies of their compadres. The driver set the

brake, and jumped down, just as the two punchers

dismounted. For an awkward moment, they all stood

with their hands on their hips, grimacing as they eye-

something, sawing the air with his left arm. The three

on the sides. Buck could see that Thor wore a

bandage on his gun hand.

12(close up) Buck pulled his red neck scarf up over

his nose; a stiff breeze brought the stench of sun-

warmed death up over the bluff.

13(close up) Buck held the front sight of his buffalo

rifle on Thor. At that distance it would have torn the

a Western version of the headless horseman myth.

14(one-shot) Ryker dismounted. He walked toward

the llow-roofed bunkhouse, striding in his irritatingly

15(cut to wide shot) As Ryker disappeared into the

red-washed bunkhouse, Thor got down off his black.

He walked the horse over to the west end of the

head, steady as a rock.

18(close up) Thor was staring at the charcoaled

smoky remains of the barn, and at the shapeless

lumps of burned meat that had been two stallions.

19(close-up) Buck fought the urge to squeeze off a

shot, and put a fifty-caliber slug between Thor’s

ears, ripping his skull open and splatter his brains

all over the yard.

and stood by the doorway. Thor nodded consent, and

from a pile by the door, into the depths of the building.

He took a knee, and struck a stick match off his boot

heel, leaning in, cupping his hands around the infant

21(close up) Again, buck resisted the hot urge to let

the Sharps speak, to have the last word.

huffing, over a fire’s crackle.

That pesky breeze brought the smell of kerosene.

Ryker whipped his hat off, and slapped it against

his leg, jumping up and down like a baboon. Thor

had remounted, his back to Buck, ramrod stiff in the

saddles, savoring every lick of the flames. The

loading of the bodies was completed, and the three

wranglers strolled over to admire the fire.

I think i missed the last installment, but I like how Buck get there gathering the evidence on who was behind the attack on his farm (as if it had been any doubt)

Yes, you missed it and it missed you. But it is right there in the archives if you want to catch up, brother.

The Backstory and music makes it!

I admire Buck’s tenacity and patience, Glenn, and his eye for detail and clues. He knew who it was, just needed the evidence, if only for himself. But he has enough to prove it. I love the use of sounds in ‘the wagon drivers Gee-hah, and little bells jingling on the Percheron’s tack’ and was rightly upset at the image of the ‘two brown behemoths, huge even at a hundred yards, with tufts of silver over their fetlocks’, especially as the ‘stiff breeze brought the stench of sun-warmed death up over the bluff.’ I was willing Buck to shoot!

And the saga rolls on, or perhaps I should say, gallops on. This is a masterwork for you Glenn. You keep it cohesive and interesting, installment after installment. Excellent writing my friend. Bronson Timber Company eh. Is that one of Charles’ enterprises…?

Buck has a will of iron in not squeezing off rounds on Thor and the rest of them. Thor may be the boss but every one of them chooses to follow his orders. I don't get why he had no trouble nailing the sheriff but hesitates on those who so richly deserve it. He's a wanted man and "the law" has already ignored the truth once. You've done an excellent job of leaving a cliffhanger that makes me want to know what's next.

The thought and detail you bring to Buck and the situations he comes across is very cinematic and very intense. Keep on writing the Buck saga.


Miss reading your work my friend. :)

I'm surprised he didn't take the shot there and then, but I like that you are keeping us in suspense...

Sometimes it is better to resist those deadly urges. Things don't always work out as planned with wen don't. An interesting episode Glenn!

I always wish I could say more about these leaps into a serial. Authentic odyssey seating in the mind's matinee, with all of the antique Western fancy intact. -B

Very descriptive. I could almost smell that kerosene and fire, too!

Tension in every frame.