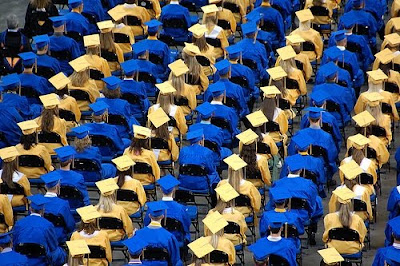 Derick drives Ruth around the loop to the lower side of campus so she doesn’t have to walk down the hill. She’s three months pregnant and just beginning to show. They line up with the other faculty members, parents, and family of the students. It’s a beautiful day, though the ground is still wet from yesterday’s rain. The girls start down graduation hill, barefoot in white dresses. They line up at the bottom, and the head calls each senior’s name. The whole thing is over in a half hour, and the kids are gone even quicker. The campus is quiet after their passing, like a great storm has passed.

The faculty gather at one of the houses to drink. No one complains anymore, though that’s all they’ve been doing for the last few weeks. Now, they joke and drink and eat. Ruthie finds a chair and plants herself there as faculty and staff members come and go. Last year, she had to kick the head and his wife out at four a.m. They were so drunk, they barely made it across Commons Lawn to their house. This year, it’s more subdued. Everyone is still thinking about Jenny’s death. They eat grilled hamburgers and chat, but it doesn’t last even until dark.

Over the weekend, Derick and Ruth clean their townhouse. They make trips to Sam’s Club and stock up on supplies. In the evenings, they see movies, both days, and when Monday rolls around, they’re out of ideas. The campus is clean and bare without the noise of screaming teenagers. They find themselves going from door to door, looking for companionship, but most of the houses are deserted, just like the dorm.

“The problem is that we work too much,” Derick says, as they walk the campus loop. They are taking carrots to feed to the horses still housed on campus over the summer. “We don’t have time to develop lives.”

“Well we better get over that,” Ruth says, patting her belly.

They make a quick list of things they’d like to do. It includes 3 items. They drive around, exploring the area to find interesting things and end up playing putt-putt golf. On the drive home, Ruthie becomes subdued.

Back on campus, Derick looks on local websites, trying to make plans. Ruthie goes upstairs for a nap. Eventually, there is a knock on the door. It’s a small group of seniors who’ve returned to visit. Derick wakes Ruthie and tells her.

“This isn’t a solution,” she says as she makes her way downstairs. “It’s only postponing.”

The house is full of sound again, for a little while.

This was the FINAL INSTALLMENT, found over on Troubadour 21

About clbledsoe:
CL Bledsoe is the author of two poetry collections, _____(Want/Need) and Anthem. A third collection, Riceland, is forthcoming later this year. A chapbook, Goodbye To Noise, is available online at www.righthandpointing.com/bledsoe. A minichap, Texas, is forthcoming from Mud Luscious Press. His story, "Leaving the Garden," was selected as a Notable Story of 2008 for Story South's Million Writer's Award. He is an editor for Ghoti Magazine http://www.ghotimag.com He blogs at Murder Your Darlings, http://clbledsoe.blogspot.com
Posted by Glenn Buttkus at 5:46 AM