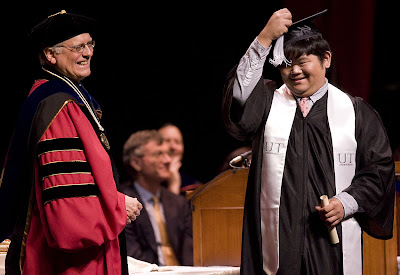 2.
I did well in college, placing first in my
class, earning a "Highest Scholastic
Achievement" award, and I was given the
honor of leading out the graduation
procession. But the graduation ceremony
was held three weeks post final exams.
I had already started my summer job in
a machine shop. The actual night of
graduation I was deep into my new
work routine and actually forgot about
it. I drove into Seattle and had gone to
a late matinee film; Anthony Quinn in
LOST COMMAND. I called home during
intermission to let my family know where
I was and my little brother answered the
phone. Very excitedly he reminded me
of where I was supposed to be, telling me
that the college had called the house
several frantic times. I dropped the phone
and broke into a dead run, thinking
"Oh Christ, tonight there will be a police
patrol car outside, and they will stop me
and ask me what I am running from."
But I made it the two blocks to my
1955 Chevy Bel Air, and
minutes later was already on the
freeway headed south. I drove the 20
miles from downtown to my campus
in 9 minutes. Squealing into the college
parking lot, mufflers blasting, I was
met by two teachers, holding my cap
and gown. I pulled it on over my greasy
work clothes, lying about why I was
late. So on that eventful evening in
in 1966, as my mother lie dying of
cancer in the shadows of a nearby
hospital, Buttkus graduated last in
line, after Zumbrowski. I feel
embarrassed each time I open my
college yearbook, and under my picture
I read about my scholastic accolades.