Chocolat and the Boudoir 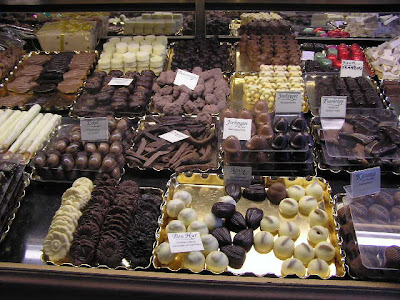 Image borrowed from Bing
The lovely Miss Friko, this morning,
on the 17th Day of Advent,
gives us fair "warning":

1.
WARNING - Be careful how much Christmas chocolate you eat!

Chocolate's reputation as an Aphrodisiac originated in South America over one thousand five hundred years ago, where it is known that it was thought to have mystical and aphrodisiac qualities by both the Mayan and Aztec cultures - the Aztec emperor, Monteczuma drank fifty golden goblets of chocolate a day to enhance his sexual prowess, it is said. However, I recently came across this snippet of warning originating in 17th century England:

"The confection made of Cacao called Chocolate or Chocoletto, which may be had in divers places in London at reasonable rates, is of wonderful efficacy for the procreation of children: for it not only vehemently incites to Venus, but causes conception in women . . . . . . and besides that, it preserves health, for it makes such as take it often to become fat and corpulent, fair and amiable."

2.
It is only a small shop
but when you go in your nose is assailed
by the aroma of real chocolate,
spices, sugar and marzipan confections
and standing at the glass topped counter,
below which are several shelves
of tray upon tray filled
with delectable and delicious truffles,
many of them laced with alcohol,
I salivate in anticipation.
If I were a dog,
I'd slobber and drool.

"Two of this one and two of that
and two of those at the back,"
is how I buy them;
Slowly the girl fills a small bag for me.
When I get them home
they are put at the back of the fridge,
well out of the way of any searching fingers.
They are exclusively for us,
we do not share the ones we buy for ourselves
(and don't feel guilty at all)
and we don't start eating them until Christmas Eve;
not from the bag, mind you, but from a pretty dish.
The Japanese tea ceremony
has nothing on me and my chocolates!

Posted deliciously over on her site Friko's Musings
Posted by Glenn Buttkus at 12:16 PM

That explains a lot. Funny I always crave it on the weekends. It is the time I spend the most time with my husband. I do love the taste of chocolat better than almost anything else.