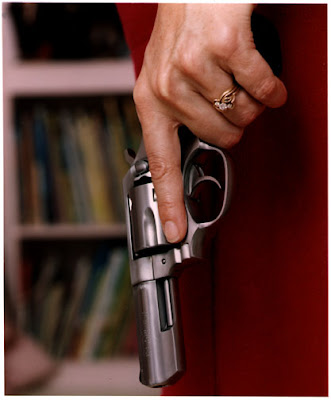 On his left hand he wore a glove - we teased him, did he think he was Michael Jackson?

He wore it genuinely to keep his hand warm in the winter, to help the arthritis which had started to get into the old gunshot wound and to hide the ugly knot of scar tissue on the back of his hand.

The story was that his gun got jammed in its holster, he had slammed the gun into his hand to free it from the holster and it had just gone off - blowing a hole clean through the middle. He who had grown up with guns, he who had fired them every day of his life, he who could tell you the name, model number, where it was made, what sort of bullets it fired, all from a single glance - he slammed a loaded revolver into his hand to remove it from it's holster? It was the stupidest story he ever told but he wanted everyone to believe it because the truth was too difficult for him to explain. It took him twenty-eight years to tell me the real story.

One afternoon he and his girlfriend argued, he told her he wanted her to clear all of her belongings from his flat and to be gone by the time he got home. She wasn't. They argued more ... he grabbed a bag, stuffed her clothes into it and as he turned to put it by the door he saw her standing in the doorway pointing his revolver straight at him. He went to disarm her, there was a brief struggle and the revolver went off, straight through the middle of his hand. As he stood looking at the hole and the blood and listening to her screaming at the sight of his hand, he made up the stupid story. The story that would save her from an attempted murder charge and that would haunt him for the rest of his life.

As he told me the story I pictured the scene, her screaming hysterically, him trying to calm her down, telling her it was alright, then telephoning for the ambulance himself and explaining as calmly as he could the stupid story he had made up to save her. For years he would wake up in a cold sweat shouting and holding his hand out but it wasn't until the last afternoon we met that he told me the truth.

Posted over on her site A New Start
Listed as #12 over on Magpie Tales 46
Posted by Glenn Buttkus at 9:24 PM

Glenn thanks for dropping by and leaving a comment - the glove was a skin tight black leather glove - I had to look up what a marksman glove was (I thought it might be what we over here call a trigger mitt - a fingerless glove) but no it was leather so more like a driving glove.

I can't find my driving gloves.