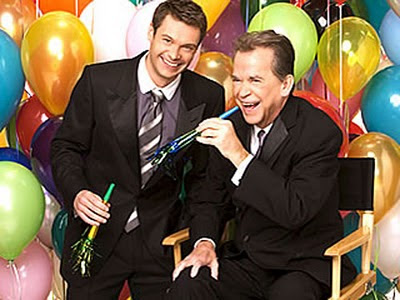 We all need to be a bit reflective
this week during these tiny flaccid
final days of our tenth year within
the fecund womb of millennium,
gather our regrets, embrace our
follies, focus our gaze on the
furry breasts of the fickle future,
before the champagne will flow,
before the fireworks will blow,
before the open-mouthed kiss,
putting both hands on the butt
of last year, before they trot out
the taxidermist’s dream, Dick Clark,
held up with a balsa peg and
a peck of Popsicle sticks pasted
to his spine, moving his lips like
Charlie McCarthy on the radio,
just a ghostly voice out of synch,
repeating those trite platitudes;
then write out resolutions on
squares of Charmin, so as to imprint
them on our backside, giving
them the respect they deserve.

Where is Guy Lombardo when you really
need him--probably schmoozing with
Lawrence Welk in Spanish, arguing
about the chosen color of the bubbles
that will be ejaculated into the pristine air
of 2011; and once again the Questions
loom large on our forehead horizons--

Will there ever be peace again
in our lifetime? Or will we spread
ourselves even thinner and send
in the troops to a third area of operation,
a third quagmire, in South Korea?
Will Obama get his numbers up?
Will Michelle thin down those
naughty school children?
Will Hillary bitch-slap a photographer
on her next trip to Yemen?
Will Sarah Palin shave her head,
and wear a red-white-and blue
burka for the upcoming
Fourth of July capitol picnic?
Will Oprah interview Bin Laden
on her premiere show for her
new network, and we will discover
Osama likes to play the accordion?
Que sara sara.


Would you like to hear the Author read this poem to you?
Posted by Glenn Buttkus at 8:31 PM

love the image, what a cool piece.

Greetings, how are you?

Welcome join us at potluck week 16, with theme as celebrations and festivities..

Feel free to claim awards via the link below…


We value your support, Have A blessed Holiday!
Best Wishes 4 the year of 2011….
Next Potluck is January 9, 2010,
Please Don’t miss this golden opportunity to shine!
Feel Free to link in 1 to 3 old poems or poems unrelated to our theme today,