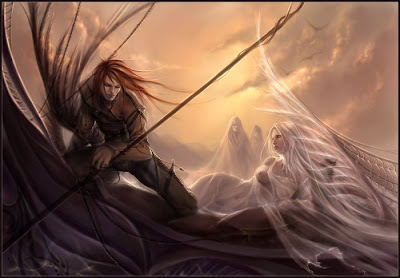 in a novel without a moral but one in which
all the characters who died in the middle chapters
make the sunsets near the book's end more beautiful.

Sunset like a burning wagon train
Sunrise like a dish of cantaloupe
Clouds like two armies clashing in the sky;
Icebergs and tropical storms,
That's the kind of thing that happens on our ocean voyage—

And in one of the chapters I was blinded by love
And in another, anger made us sick like swallowed glass
& I lay in my bunk and slept for so long,

I forgot about the ocean,
Which all the time was going by, right there, outside my cabin window.

And the sides of the ship were green as money,
and the water made a sound like memory when we sailed.

At night we consoled ourselves
By discussing the meaning of homesickness.
But there was no home to go home to.
There was no getting around the ocean.
We had to go on finding out the story
by pushing into it—

Posted over on the Writer's Almanac
"Voyage" by Tony Hoagland, from Hard Rain
Posted by Glenn Buttkus at 11:20 AM