The Kindness of Joseph 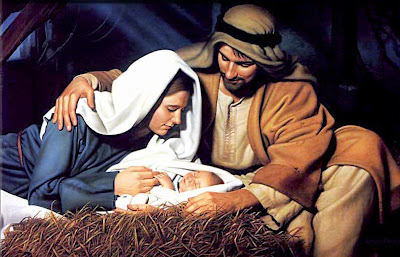 Image borrowed from Yahoo
The Kindness of Joseph

Friko found these lovely facts about Joseph for the
15th day of Advent on her cyber calender. She wrote:

While I was researching items for this Advent Calendar I came across a legend which people in the lowlands of Northwest Europe, between the two big rivers, the Meuse and the Rhine, told about St. Joseph, that unassuming, almost invisible figure, who was the husband of the Virgin Mary. Hundreds of years ago, during long, dark winter nights, when they sat by the flickering light of peat fires creating restless shadows on the walls of their huts they told stories; stories which had been handed down through the generations and were accepted as truth.

One of these was a rather endearing story about Joseph's kind heart and presence of mind. We know that he was a carpenter and must therefore have a been a practical man, a man who knew how to solve practical problems; or so my forebears, the earthbound, simple peasants of the wide lands between the two big rivers believed.

The story they told was about the Nativity and the baby Jesus in his crib in the cold and draughty stable. They lived in a land which was bitterly cold at this time of year, the days were short; life was hard in the unforgiving icy winds which blew unhindered over the plains and they therefore assumed that the conditions in Bethlehem must have been similar. When babies feel the cold, they cry. It was the most natural thing for them to see the child's discomfort as something to wring the heart of a kind man like Joseph and for him to do something to alleviate the suffering.

The legend says that Joseph took off his long woollen stockings. He unrolled them and carefully cut them into lengths that would serve as swaddling clothes for the baby crying with cold and the discomfort it must feel sleeping in a crib lined with nothing but straw and hay.

This story must have made a deep impression on the poor, put-upon peasants whose own hardship was so great. They knew deprivation and poverty too well not to be touched by a story telling of kindness.

During the Reformation the legend lost its potency; perhaps the story wasn't 'holy' enough or too un-biblical. But it couldn't do away with it completely: among the items kept in the sacred shrines at Aachen Cathedral pilgrims still come to visit 'Joseph's Hose' today.

Posted over on her site Friko's Musings
Posted by Glenn Buttkus at 7:28 PM