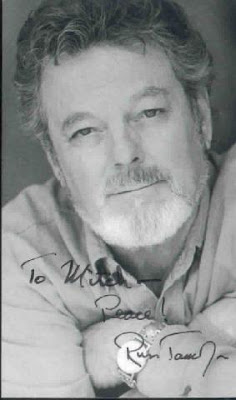 Image borrowed from Yahoo
Russell Irving "Russ" Tamblyn (born December 30, 1934) is an American film and television actor, who is arguably best known for his performance in the 1961 movie musical West Side Story as Riff, the leader of the Jets gang.

Tamblyn was born in Los Angeles, California, the son of actors Sally Triplett and Eddie Tamblyn. He is the older brother of Larry Tamblyn, organist for the 1960s band The Standells.

Discovered at the age of ten by actor Lloyd Bridges after acting in a play, Tamblyn's first film appearance was a small non-speaking role in 1948's The Boy With Green Hair. He also appeared on The Ed Sullivan Show as a child. He portrayed the young Saul in Cecil B. DeMille's 1949 version of Samson and Delilah. He played the younger version of John Dall's character in the 1950 film noir Gun Crazy. Later the same year, he had a minor role as Spencer Tracy's son and Elizabeth Taylor's younger brother in Father of the Bride, as well as in the following year's sequel, Father's Little Dividend, both directed by Vincente Minnelli. He was also a young soldier in boot camp in 1953's Take the High Ground. His training as a gymnast in high school and abilities as an acrobat prepared him for his breakout role as Gideon, the youngest brother, in 1954's Seven Brides for Seven Brothers.

He appeared with Glenn Ford and Broderick Crawford in The Fastest Gun Alive (1956), where he performed an extraordinary "shovel" dance at a hoe-down early in the film. Though uncredited, he served as a choreographer for Elvis Presley in 1957's Jailhouse Rock. He portrayed the role of Norman Page in the 1957 film adaptation of Peyton Place, for which he was nominated for an Academy Award for Best Supporting Actor. He then played Tony Baker, a cocky, slang-slinging, switch-blading, drag-racing, dope-dealing tough teen in 1958's "High School Confidential". Performances in film musicals included the title role in 1958's tom thumb and Danny, one of the sailors in the 1955 film version of Hit the Deck. His most famous musical role was Riff, the leader of the Jets in the 1961 film West Side Story, an adaptation of the Broadway musical of the same name.

In 1960, he portrayed The Cherokee Kid alongside Glenn Ford in Cimarron. He appeared in two 1962 MGM-Cinerama movies , The Wonderful World of the Brothers Grimm with a cast that included Laurence Harvey, Karlheinz Boehm, Barbara Eden, Jim Backus, and Buddy Hackett, and How the West Was Won with a cast that included Henry Fonda, Karl Malden, Gregory Peck, Debbie Reynolds, James Stewart and John Wayne. He was seen the next year as Orm in The Long Ships, as Luke Sanderson in The Haunting, and as Lt. "Smitty" Smith in Follow the Boys. Tamblyn starred in the 1966 Japanese kaiju film War of the Gargantuas. Tamblyn played the supporting role in Neil Young's 1982 Human Highway while also credited for screenplay and choreography. He appeared in the horror film Necromancer in 1988.

Tamblyn is self-credited as director, choreographer and actor for Neil Young's Greendale concert tour.
Posted by Glenn Buttkus at 12:12 PM