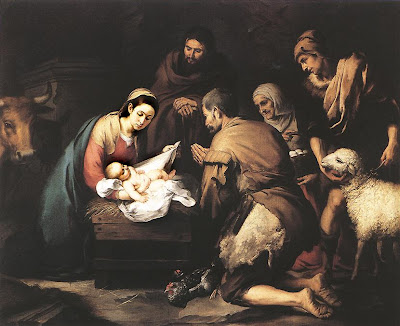 I was just returning to the station when I espied three strange men on camels travelling across the desert.

Upon approaching them they claimed to be three wize men, following a star, but I distinctly smelt alcohol on their breaths.

Upon further questioning they claimed to be Melchior, Caspar and Balthasar, Kings of the Orient who had been visited by a spirit telling them to bring gifts to a child in a manger. It seemed clear to me that they had been visited by several spirits, including the spirit of Jack Daniels on several occasions.

I proceded to ask them to dismount from their camels and to turn out their pockets. Upon searching the three so-called Kings I discovered that one was carrying Gold, the second Frankensense and the third Myr. They claimed that these were gifts for the child. When I questioned whether some form of cuddly toy wouldn't be more appropriate for a child they could not provide a suitable response.

I was just about to ask them to follow me to the station when we were interrupted by three shepherds coming in the opposite direction. They were also acting in a most peculiar manner and claimed to have followed the star. I decided that they were either in collusion with each other or that the Annual General Meeting of Village Idiots was in town.

However, as it was nearing the end of my shift I decided to follow them back to The Comfy Inn, Bethelehem, where I found a young family sleeping in the barn with the animals.

Having made a mental note to report the parents for child neglect I asked the two persons present whether they were, in fact, the parents of the poor child lying in the straw.

The male then responded that he was a travelling carpenter and that he was not the father. His wife had claimed that she had been impregnated by God himself, although he seemed to believe it was actually some fellow called Gabriel. I recommended the couple to marriage guidance, but decided not to pursue the issue of parentage as it was becoming increasingly clear that everyone was bonkers

It was at this point that I turned to the three men I had initially encountered and asked if they still had any of the spirits they had initially spoken of. Sadly they did not and I returned to the station where I had a bottle of Bells hidden under the desk

Posted over on Hungry Pixies
Listed as #89 over on Magpie Tales 45
Posted by Glenn Buttkus at 5:19 PM