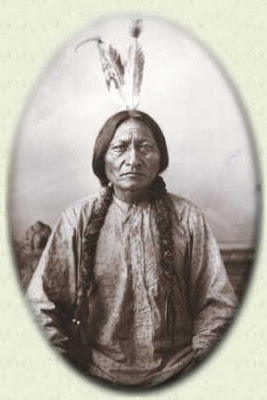 
They didn't do it themselves.
They got us to do it.
They divided us.
My husband, the lieutenant of police, led the group
to Sitting Bull, the hostile. I had to be away. My family
called me to their camp on Cannonball River.
I saw the runner. I knew it was about Bull Head.
I knew my husband was in trouble. But shot? But near death?
I started immediately. The runner already was far ahead.
A coyote walked beside me saying nothing.
I followed an old trail. Twenty miles a day, I suppose.
I slept once in the leaves in a ravine. The clumps of grass
rattled their stories. I dug roots. I ate dried buffalo meat
my sister wrapped in a medicine pouch. I heard my mother's voice.
She spoke my tiredness out of the way. The coyote was
my father's voice saying nothing I could hear. I heard the birds.
They said, go, go, go. They were chirping. The leaves were howling.
The wind was an uncle who said Bull Head would be dead soon.
I had to see him. I had to tell him he'd been a good husband.
He had to know that for his trip through the stars.
We'd betrayed our own people. He would know that soon.
It was something I didn't tell him.
We had our different ways to see.


Diane Glancy
Posted by Glenn Buttkus at 9:50 AM