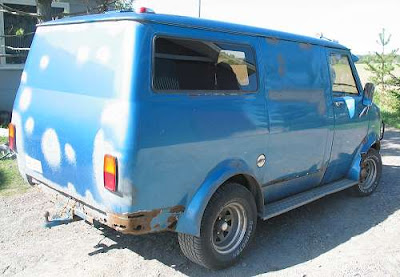 
My eyes were closed tight in the reservation November
night and the three in the morning highway was the longest
in tribal history. It was my father driving the blue van
filled with short Spokane Indians, back from the

Kamiah All-Indian Six-Foot-And-Under Basketball Tournament.
Orofino, Lapwai, Lewiston, Rosalia, Spangle, all the
small towns miles apart, all the Indians in the bars
drinking their culture or boarded up in their houses

so much in love with cable television. I wasn't there
when the old Indian man from Worley said it, but I
know it must be true: Every highway in the world
crosses some reservation, cuts it in half.

I was awake, listening to the sleeping sounds of the
other Skins, to my father talking to his assistant coach,
Willie Boyd, both trying to stay awake, afraid of the
dark. "Willie, I'm getting too damned old for this."

"We'd win more games if we could hit our free throws,
enit?" "Yeah, maybe. I guess we need to find a couple
more players. Arnold gets tired, you know?" "Shit,
he's young. When I was his age I was the toughest

goddamned Indian on the reservation, don't you know?"
"No way, I lived next door to you. Shit, you weren't
even the toughest Indian on the block, enit?"
And they laughed.

It was hunger made me move then, not a dream, and I
reached down and rummaged through the cooler for
something to eat, drink. Two slices of bread, a half-
full Pepsi, melting ice. My hand was cold when I

touched my father's arm. "Hey, Dad, we ain't got any
food left." "What's in your hand?" "Just two slices
of bread." "Well, you can have a jam sandwich, enit?"
"What's that?" "You just take two slices of bread and

jam them together." Willie laughed the loudest and
looked back at me. "You can have a wish sandwich, too,"
Willie said,"All the time you're eating, you wish there
was something in your sandwich."

All the talking stories and laughter woke up the rest
of the Skins, and my brother, two-hundred and eighty-
pound point guard, sat up and farted. "Hey," he said,
"I'm hungry."

I was on Highway 2 just before Reardan when the State
Trooper pulled the blue van filled with Spokane Indians
over to the side of the road. The Trooper walked up to
my father on the driver's side cool and sure, like he

was ordering a hamburger and fries or making a treaty.
"Excuse me, officer, what's the problem?" my father asked.
"You were weaving back there. Been drinking much?"
"Ain't had any, officer. Just coming back from a
basketball tourney.

The Trooper held us all in his flashlight for a moment,
held that light a little longer on the empty cooler.
"What was in that?" he asked. "A whole lot of wishes,"
Willie said and we all laughed.

The Trooper took my father's license and the registration
card and walked back to his cruiser. I watched him walk
back in the headlights, taillights, moonlight, all pushing
back a small circle of darkness.

"We're all going to jail, enit?"
"Only if being Indian is illegal."
"Shit, being Indian has been illegal in Washington since
1972, don't you know?"

"How do you know that? When were you born?"
"1972."
We were still laughing when the Trooper came back
to the van.

"I didn't do shit."
"Mr. Victor, I won't ask you again."
My father climbed out and we watched as the Trooper
made him walk a straight linek, touch his nose with
his eyes closed, sing the Star-Spangled Banner.

"Who holds the major league record for most home runs
in a single season?" the Trooper asked my father.
"Roger Maris."
"No, it's Babe Ruth. You must be drunk. Who shot J.F.K.?"

"It wasn't Lee Harvey Oswald."
"Wrong. Who invented velcro?"
"You did."
The Trooper bumped chests with my father, spit in his face
as he yelled.

"Now, you understand, Indian. Who is the most beautiful
woman in the world?"
"Your mistress."
"Yes. Who is the greatest entertainer of all time?"

"Frank Sinatra."
"Perfect. What would you order with your bagel?"
"Cream cheese."
"Definitely. Never lox. Now, the last question.

Are you now or have you ever been a member of the
Communist Party?"
"No, no."
All the Indians were silent in the blue van as it

climbed up the roads leading home to the Spokane
Indian Reservation. I tore up my two pieces of
bread and passed it around to the other Skins.
Then the blue van shuddered, the headlights went

dim, out, and the van stopped dark in the endless
night.
"What the hell is it?"
"Out of gas."

"Shit, we're going to have to push it home."
We climbed out of the van while my father and
Willie sat in the front, watching the road.
Ten skinnyspit Indians pushed hard while

my brother struggled against his weight, against
all of our weight.
"I'm so damned tired," he said, stopped pushing,
stood still. I looked back as he stood on the

reservation highway. I turned back to the van,
put my shoulder to the cold metal and waited
for something to change.


Sherman Alexie........from The Business of Fancydancing.
Posted by Glenn Buttkus at 11:34 AM

Jesus, that's long. I'll have to come back tomorrow.

A wimp in Austin.

Thanks for the stop by, Jannie. You will be glad when you come back and finish reading this piece. Nobody spins a Skins tale like Sherman.

What was the deal with the Trooper's spiel?

I really liked this line...

I watched him walk
back in the headlights, taillights, moonlight, all pushing
back a small circle of darkness.

You been kidnapped by Christmas?