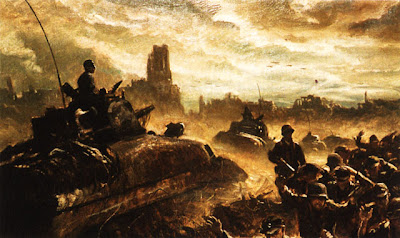 
Drinking all night,
with Lester FallsApart, he tells me
the story about the time
he spent in McNeil Island Prison
for writing bad checks.

I just played basketball all the time,
he tells me. I went in there thinking
all Indians could play ball,
but the Skins in there
were two hundred winter beers wide.

Anyway, there was this old Skin,
named Silas Something-or-Other,
always dressed up traditionally,
braids and all. He never talked
but everyone said he was a lifer,

in for some serious shit, and I wonder
to myself what he done to get life,
so I walk up to him
one day in the yard and ask him
what the hell he did.

Well, he says to me, during the war
a few of us captured 20 Germans but we
needed help, so the others left me
to guard the prisoners while they went
to rejoin the company and get relief.

Shit, they must have got ambushed or forgot me
or just plain left me because they never
came back. After a few more days
of staying awake, watching the Germans watch me,
scared all to hell of falling asleep and
those bastards getting loose, I slapped in
a full clip and killed all those fucking Nazi
bastards.

I supposed I was crazy being so tired and scared
because I kept shooting them, unloaded ten or twenty
banana clips on them. When they found me,
I was cutting off all kinds of body parts.
I been in a lot of places since then and now,
I'm here, on the Island.

That's fucked up, I tell Lester,
and he agrees and we drink one for Silas
Something-or-Other, the only medal he'll ever get.