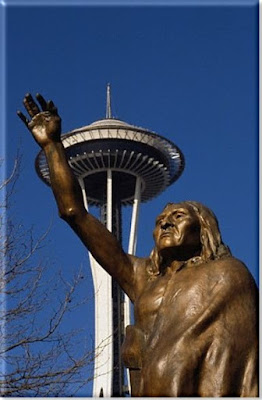 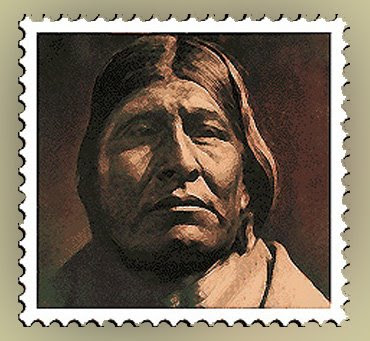 
What is man without the beasts? If all the beasts were gone,
men would die from great loneliness of spirit,
for whatever happens to the beasts also happens to man.
All things are connected. Whatever befalls the earth
befalls the children of the earth.

We know that the white man does not understand our ways.
One portion of the land is the same to him as the next,
for he is a stranger who comes on the night and takes
from the land whatever he needs. The earth is not his brother,
but his enemy - and when he has conquered it, he moves on.
He leaves his fathers' graves, and his children's birthright
is forgotten.

The sight of your cities pains the eyes of the red man. But perhaps it is because the red man is a savage and does not understand.

There is no quiet place in the white man's cities,
no place to hear the leaves of spring or the rustle
of insects' wings. Perhaps it is because I am a savage
and do not understand, but the clatter only seems
to insult the ears.

The Indian prefers the soft sound of the wind darting
over the face of the pond, the smell of the wind itself
cleansed by a midday rain, or scented with pinon pine.
The air is precious to the red man, for all things share
the same breath - the animals, the trees, the man.

Like a man who has been dying for many days,
a man in your city is numb to the stench.

A few more hours, a few more winters, and none of the children
of the great tribes that once lived on this earth,
or that roamed in small bands in the woods, will be left
to mourn the graves of a people once as powerful
and hopeful as yours.

The whites, too, shall pass - perhaps sooner than other tribes.
Continue to contaminate your own bed,
and you will suffocate in your own waste.

When the buffalo are all slaughtered,
the wild horses all tamed,
the secret corners of the forest heavy with the scent
of many men, and the view of the ripe hills blotted
by talking wires, where is the thicket? Gone.
Where is the eagle? Gone.

And what is it to say farewell to the swift and the hunt,
to the end of living and the beginning of survival?
We might understand if we knew what it was that the white man
dreams, what he describes to his children on the long winter nights,
what visions he burns into their minds, so they will wish
for tomorrow. But we are savages.
The white man's dreams are hidden from us.

The red man has ever fled the approach of the white man,
as the morning mist flees before the morning sun ...
It matters little where we pass the remnants of our days.
They will not be many.

But why should I mourn the untimely fate of my people?
Your time of decay may be distant, but it will surely come,
for even the white man, whose God walked and talked with him
as friend with friend, cannot be exempt from the common destiny.
We may be brothers, after all. We will see ...

Every part of all this soil is sacred to my people.
Every hillside, every valley, every plain and grove
has been hallowed by some sad or happy event in the days
long vanished. The very dust you now stand on responds
more willingly to their footsteps than to yours,
because it is rich with the blood of our ancestors
and our bare feet are conscious of the sympathetic touch.

Even the little children who lived here and rejoiced here
for a brief season love these somber solitudes, and at eventide
they greet shadowy returning spirits.

And when the last red man shall have perished, and the memory
of my tribe shall have become a myth among the white men,
these shores will swarm with the invisible dead of my tribe;
and when our children's children think themselves alone
in the field, the store, the shop, upon the highway,
or in the silence of the pathless woods, they will not be alone.

At night when the streets of your cities and villages are silent
and you think them deserted, they will throng with the returning
hosts that once filled and still love this beautiful land.

The white man will never be alone.

Let him be just and deal kindly with my people, for the dead
are not powerless. Dead, did I say? There is no death,
only a change of worlds.

Chief Seattle - Suqwamish & Duwamish
Posted by Glenn Buttkus at 8:40 AM