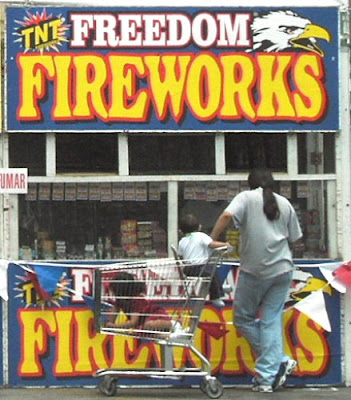 
"It was the worst goddamn thing I ever saw,"
the Old Man tells me,
"I was working out on the Reservation last summer.
Fourth of July. The Smoke Shack was selling fireworks,
had it all stored in the basement, and about three
in the morning, it explodes.

Turned out some little Skin broke in, you know,
and we guess he didn't want to turn on any lights,
so he flicked his Bic
and up it all went.

Anyway, we're sifting through the ash, before
we even knew the kid was there, and I kick something.
I look down and it's the kid, just his head.

I yell over to one of the Tribal Cops
and he comes over, picks the head up
and boots it like a damn football, thirty
or forty yards.

Fucking kids, the Tribal Cop yells,
walks back to his car, climbs in, and drives off.

I couldn't believe it," the Old Man tells me,
"I never thought a head could travel that far."


Sherman Alexie.........from The Business of Fancydancing
Posted by Glenn Buttkus at 7:56 AM

Jay-sus. I've not yet lost my head in a fireworks shack yet. Then again I don't go flicking my bic there.

Yeah, that last line is like something out of Stephen King or Edgar A. Poe. Creepy but good, enit?