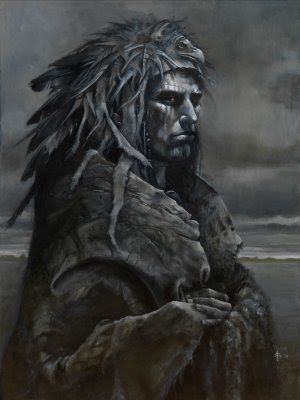 
I was hostile to the white man...We preferred hunting
to a life of idleness on our reservations. At times we did not
get enough to eat and we were not allowed to hunt.
All we wanted was peace and to be let alone. Soldiers came...
in the winter...and destroyed our villages. Then Long Hair
(Custer) came...They said we massacred him, but he would have
done the same to us. Our first impulse was to escape...
but we were so hemmed in we had to fight. After that I lived
in peace, but the government would not let me alone.
I was not allowed to remain quiet. I was tired of fighting...
They tried to confine me... and a soldier ran his bayonet into me.
I have spoken.

"We did not ask you white men to come here. The Great Spirit
gave us this country as a home. You had yours. We did not
interfere with you. The Great Spirit gave us plenty of land
to live on, and buffalo, deer, antelope and other game.
But you have come here, you are taking my land from me,
you are killing off our game, so it is hard for us to live.

Now, you tell us to work for a living, but the Great Spirit
did not make us to work, but to live by hunting. You white men
can work if you want to. We do not interfere with you, and again
you say why do you not become civilized? We do not want your civilization!
We would live as our fathers did, and their fathers before them."

Crazy Horse - Sioux
Posted by Glenn Buttkus at 9:05 AM