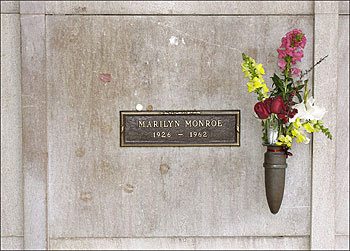 my heart beating
Dallas, Dallas
your father held me


Data from the Funeral of Marilyn Monroe

Before we started dressing her, the embalmer decided to use a surgical procedure to reduce the swelling in her neck, so he cut some hair away and made an incision on the back of her neck and sutured it up tight. As she was being prepared, one of the partners in the mortuary, Mary Hamrock, came into the embalming room. We had just dressed her in a chartreuse Pucci dress with a Florence, Italy, label in it.

Mrs. Hamrock made the observation that in her opinion it didn't look like Marilyn Monroe because she was too flat-chested. The embalmer explained that the autopsy had rendered her physique in that condition. The family had actually brought in to the mortuary a pair of breast enhancers that she had frequently worn, but they were too small to compensate for the effects of the post-mortem.

Mrs. Hamrock removed the falsies from the dress, discarded them and proceeded to form her own version out of cotton from the prep-room shelf. When she finished, she took a few steps back and declared, “Now that looks like Marilyn Monroe!”
Posted by Glenn Buttkus at 12:22 PM