The New Era of Obama 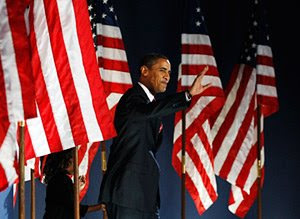 1. Yes, it's historic and incredible that a black man is president of the United States. But, dang it, it's just as important that a black woman is the first lady. Think about it. Jackie O! Lady Bird Johnson! And Michelle Obama in her Gap dresses! Please don't discount the cultural power of the first lady. I am very excited to see how Michelle Obama also revolutionizes the White House.

2. How many Republicans watched the footage of the Obama and McCain gatherings Tuesday night and noticed the incredible differences? The Obama crowds were racially, culturally, sartorially, rhythmically and age diverse. The McCain crowds were, well, they were very blond. How will Republicans address this imbalance? Maybe thousands of young Republicans will become high school and elementary school teachers in poor and inner-city neighborhoods, while Republican political leaders will demand and help create massive funding for poor and inner-city schools. Of course, I'm kidding. Republicans will do no such thing. But they should adopt a revolutionary educational platform.

3. Jesse Jackson wept Tuesday night. And they were tears of joy and grief. That man was standing beside MLK Jr. when he was assassinated. Jesse Jackson has earned those tears.

4. Stevie Wonder and Bruce Springsteen have performed for and with Obama. So aren't you absolutely excited about who will perform at the inauguration parties? Here's hoping Beyoncé, Tim McGraw, Kanye West, Death Cab for Cutie, the Dixie Chicks and the Harlem Boys Choir perform "People Get Ready."

5. I hereby order that "mandate" immediately be stricken from all the dictionaries and vocabularies of every Democrat in the country. That dirty word has no place in a democracy. That said, feel free to use the phrase, "Wow, we kicked some ass."

6. Thank God for Tina Fey and the power of political art.
Posted by Glenn Buttkus at 12:48 PM